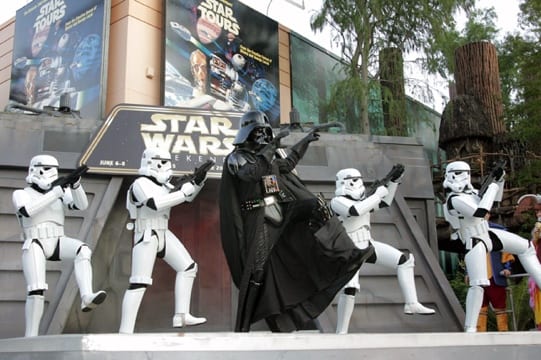 Hey cool, the ESRB released their ratings certificate for Star Wars Kinect, let’s check it out. “In this action game set in the Star Wars Universe, players use their body movements to perform activities that include dance tournaments…”

WAIT…WAIT….WAIT… give me a second. Let me read that again….yep, that definitely says dance tournaments. Because nothing says intergalactic civil war like dance-offs.

The ESRB goes on to elaborate further on the dance sequences by saying that in the dancing mini-game, some female characters perform suggestive moves (e.g., gyrating their hips/buttocks) and wearing revealing outfits (partially revealed cleavage/buttocks). The words ‘damn’ and ‘hell’ can be heard in the dialogue.”

So what’s worse? Knowing that the Star Wars game you’ve waited for, but keeps sounding worse and worse will now include dancing or Vader’s “NOOOOOOOO!” in the blu-ray version of Return of the Jedi?