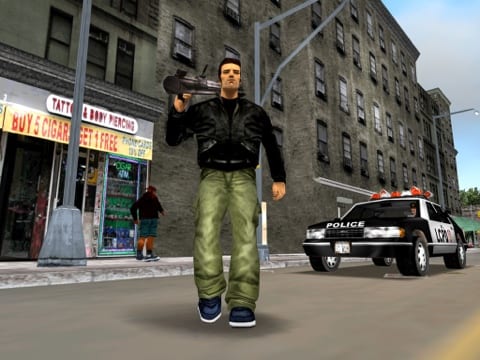 Over the last few years, the staff here at Blast has been working on a list of what we view as the top 100 games of all time. We hope to finalize it so it’s out early next year, but It hasn’t been an easy process and we’ve all argued back and forth about just what should be number one, but I’ve stayed strong on what I think it should be – Rockstar’s genre defining open world crime adventure Grand Theft Auto III.

You see, GTA III kind of saved video games for me. There was a time when I really didn’t care about the industry and I was one of those “casual gamers.” Then my brother came home with GTA III and everything changed. For the first time ever a video game didn’t fit into a tiny box, it felt like it didn’t just end when I turned the power off. This was a living, breathing virtual playground and I was free to do just what I want. I spent countless nights just seeing what I could do, I missed dates, parties and holidays for GTA III.

I was admittedly a bit unsure about how this experience would translate to tablets and smart phones, but it was all for not – the tenth anniversary edition of Grand Theft Auto III is exactly how you remember it and still feels incredibly fun and rewarding to play. Sure, I could gripe on a few things, but GTA III is greater than the sum of all of its parts, and it’s a must have for anyone who loves the series and owns a device that can run it.

The mot impressive aspect of this version of GTA is just how impressively complete it is. Like the other games in the series, GTA III is a massive game and it’s quite the feat that Rockstar’s was able to convert the entire experience to the new medium. Immediately upon loading the game ( well, as soon as I could), I took to the roads and looked for things I remember from my time with the game and it’s all there. Perhaps most impressive is the fact that the game’s entire soundtrack is in tact, a rare feat in this modern day of licensing agreements. The sound on the game, especially the character’s voices can sound a bit tinny at times, but this is rare and doesn’t get in the way of how well the experience translates.

But maybe it’s too much of the same. For this tenth anniversary edition, I was really hoping for some extra director’s cut type content. What about the deleted scenes we heard so much about? What about the recently released concept art for the game? I would gladly pay a few extra dollars to see this kind of stuff for an experience that shaped my love of games.

What I was out worried about with The new version of GTA III was how the game’s controls would translate to touch screens. I played the game on an iPad 2 and within the first few seconds of driving a car, I had it flipped over and in flames. Whoops. Then I took my time and just let the controls handle themselves and realized that it felt extremely fluid. On the PS2, the controls were more of a pedal to the floor, always going type of experience, but here – they’re based more on, timing and rhythm and it fits the experience quite beautifully. Where there times when I “accidentally” lost control and mowed down a few pedestrians? Of course, but it’s all part of the GTA experience.

The Blast Factor: Grand Theft Auto III is a bit personal to me, so I was happy to see it get such a superb re-release on a very modern platform. It’s a game that shows its age a bit, but still feels incredibly rewarding and immersive as ever. For me, it’s not just a great re-release, it’s the game that verifies that tablets and smart phones can not only be impressive gaming devices, but can hold their own against consoles.