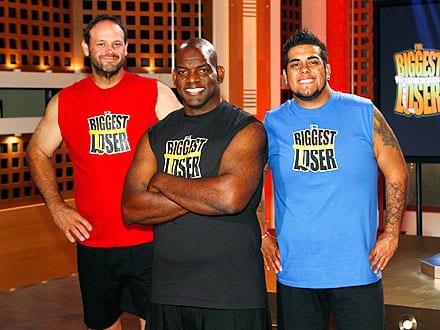 Last night, NBC’s weight-loss phenomenon, “The Biggest Loser,” crowned its Season 12 champion. After another round of will-testing workouts, cutthroat eliminations, and enough human drama to make your head explode, only one man (this is the first final weigh-in consisting of all males) will stand upon the notorious scale as the victor.

The three finalists, Ramon, Antone and John, all had compelling stories.

Ramon was diagnosed on diabetes when he first came to the ranch, and after that dedicated himself to restoring his life. Ramon also got a neat subplot in that he fell in love with another contestant, Jessica, adding yet more motivation to his lifestyle change.

Antone is a former NFL offensive lineman who had let himself go after leaving the game and was looking to rediscover the athlete within.

And John might well have been the one who wanted the crown most. In the words of host Alison Sweeny (a.k.a Sami Brady on “Days of Our Lives”) “No one has ever wanted this as bad as John.” John said himself, “I didn’t come to do anything, but win.” John proved his commitment mid-season when he became the quickest to lose 100 lbs in “Biggest Loser” history.

With three months between their last weigh-in and the awards ceremony, the three finalists sized each other up hoping that in their time off the ranch they had worked just that little bit to become the man with the highest weight loss percentage.

And the winner of $250,000…with a weight loss percentage of nearly half his body weight…49.44 percent, The Biggest Loser isssssssssss

So the man who was the hungriest, ends up shedding the most fat. Isn’t that some irony for ya?

Antone came in second place with a weight-loss percentage of 45.19 percent, having started at 447 lbs and finishing at 245 lbs. Ramon came in third with 43.38 percent. Coming in as the smallest out the three at 355 lbs, Ramon also finished the slimmest at 201 lbs. Also, on an inspiring side note, Ramon no longer has diabetes.

Also before the final prize, Biggest Loser handed out the consolation prize of $100,000 to the eliminated contestant who had lost the highest percentage of weight, including what they lost off “the ranch.”

The winner was Jennifer, who beat nearly edged out Vinny, losing just three more pounds than she needed to pass his total percentage lost.

Congrats to all the contestants who clearly have made tremendous strides in not only weight-loss, but in building healthier lifestyles. All involved seem considerably happier with their new-found self-confidence and work ethic and I wish all of the “Losers” the best for the future.