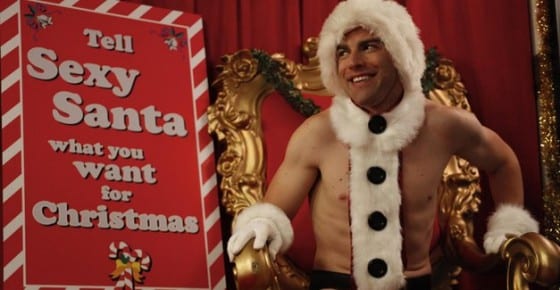 Although this show may have been billed as the adorkability train that Zooey Deschanel would hitch a ride to on her way to TV stardom, by my measure, this show succeeds when her three guy roommates are bearing the comedic load. Jess is best when she is a motivating force for these men in her life, and when she provides us the opportunity to delve into her “rainbows and unicorns” outlook and see the darkness beneath it. To me this is the perfect balance of the Manic Pixie Dream Girl-ishness (coined by Nathan Rabin as a term to describe generically quirky girls whose purpose is to teach brooding young men to embrace life) that is undoubtedly appealing in Deschanel, and the needed depth to establish her own dimensions and pursuit of happiness outside the guys she enchants.

Clearly from the pilot, these three have become taken with Jess and all episodes have wrapped with them collaborating to lift her spirits because she has so clearly refreshed theirs. “The 23rd” is no exception, concluding with the gang yelling for the neighbors to turn on all their lights to make the holiday joyous again. There is nothing inherently wrong with this premise, just the formulaic way in which it’s manifesting week-to-week. Straight males, justifiably, are often shaped by the women that enter their lives, but it is important for both Jess and Nick, Winston and Schmidt to define themselves as individuals within the show.

Fortunately, for at least Winston and Schmidt we get some of that definition. Schmidt, clearly and continually is my favorite character, and this episode only affirmed that. The humor he embodies is the most clearly defined, and for a character that is so often pegged as a douchebag he is the most endearing of the guys at this point. This week he is coerced yet again to play the role of sex object at the office Christmas party. He apparently always consents to the job, rationalizing it by saying no one else will do it since he’s the only guy. But this constant exploitation clearly bothers him, and despite his evident obsession with his appearance he wants to be fully recognized as a competent employee. And while the precarious situation of his female coworkers of fetishizing him for various holidays was hilarious (Sexy Easter Bunny, Cinco de Sexy, Sexy Martin Luther King Jr. Day) I was mostly glad to see my guy stand up for himself and prove to me what should have been obvious. He is not just a pretty face and a hot body. Though when Cece tells him this directly he focuses on her admission that he has a hot body first. Schmidt hopefully will continue to reveal his less superficial desires while still delighting us with his propensity to slip into douchebaggery.

Winston may have gotten the least airtime, much to my chagrin, but he too got a solid development. Arriving at Schmidt’s business party in a blazer with shirt and tie beneath, Winston announces his intention to use this affair as a networking opportunity. He harbors intense anxiety about not having a job and though post-recession Americans can certainly relate we get the sense that he takes this unemployment as more of a hit to his ego than his wallet. Though initially he doesn’t seem to be actively searching more than he is socializing, he stumbles upon a pint-sized opportunity: the son of Schmidt’s boss, Gina.

They hit it off, contrary to his mom’s assumptions that he doesn’t like people. Pretty soon, Winston and the kid are fist-bumping and laughing. Then later when he believes that Schmidt has killed Santa (he does vaguely decree that ‘Santa is dead’) Winston finds him promptly, and the kid affectionately calls him “Lebron.” The nickname is bittersweet (a reminder of the basketball star he couldn’t be..and maybe a bit racist), but because he has become so taken with the kid he obliges. Gina then offers him a job to look after her son, claiming that whatever figure is in his head she will top. I hope we continue to see Winston, “The Child Whisperer.” It’s an unexpected trait, and gives needed depth to the guy who in episodes prior was mostly categorized for not being in Latvia playing ball anymore and being ultra-competitive.

And the A-plot is between Nick, Jess and Paul (Justin Long) and it involves a considerable amount of discomfort. Some funny, some just uncomfortable. First, Paul and Jess exchange gifts and both miscalculate in different ways. Jess goes for the gag, A plush, anatomically correct heart of a 50 year-old non-smoker. Awesome in that it exists and lame for the same reason. Paul doesn’t seem to feign appreciation, and seems genuinely delighted by the gift. He himself miscalculates his gift too by buying two tickets to Vienna to see the Salzberg Music Festival. Again, awesome intrinsically, but weird since they have only been going out for a month. Then Paul further complicates the holiday by saying the most loaded trio of words, “I love you.” Unsure about her reciprocity of that feeling she simply replies, “Thank you.” Jess is reasonably dismayed, and foreign to this inability to return the favor, “I’m the one who loves more. That’s my thing.”

I had no problem buying into that complication because the idea of one partner loving the other more intensely, early in the relationship, is common, and sometimes it’s too much of a burden for the lesser loving half to take. What I disliked was the incorporation of Nick. Early on, Nick was a man torn up about his ex, needing to step back into the world of the living after his grief cut him off. Now, that he has begun to heal though, it seems like his life revolves solely around Jess. Psychologically it makes sense for him to latch onto someone else for him to share his affections with, but because the writers are playing coy, he’s acting indifferent to Jess’ romantic endeavors or loudly opposing involvement. So when he accidentally shares with Paul that Jess doesn’t love him back before she got the chance to break the news, I wasn’t surprised one bit. Nor was I surprised when he mistakenly locked himself onto the balcony with the bickering couple.

For one, it is a trick as old as sitcoms in order for some truths to be divulged, but instead we just get Nick writhing at the door whining “This is my nightmare,” and contributing to the conversation with unwelcome judgments of Paul’s reaction. The funniest instance to stem from the scene is when Nick’s phone rings and it’s his mom, worried he will miss his flight home for the holidays for the fourth year in a row! Then the invisible mom accuses him of being high and he retorts that he is done with that phase! I’m a sucker for one-sided phone calls though, classic.

While none of this episode struck me as unfunny or detrimental to the show, the Jess, Nick, Paul triangle felt tired and not the freshest use for Nick. I was encouraged when Jess admitted her lack of love for Paul might be a result of not wanted to be hurt again, but by making Nick be the wedge between them, it cheapened the honesty behind the breakup. And by introducing advancements for both Winston and Schmidt it became quite the functional episode. Jess shed some holiday weight (sorry Justin Long) and provided us more substance to care for besides the four roommates as a collective. Winston has someone to watch over, and Cece and Schmidt are inching closer to the conclusion that they just might be what the other is looking for.

Nick remains the only one without purpose moving forward. At episode’s end he did turn his car around (missing his plane yet again and designating Winston to be the one to apologize on his behalf) to cheer Jess up with “Candy Cane Lane,” a street with a gluttonous appreciation for Christmas lights, but as mentioned, this is Nick only in relation to Jess. He used to be someone without much belief in himself, someone who was still heartbroken, a man who saw the world through jaded and sarcastic glasses, now he is just the guy who won;t admit he’s pining for Jess, and I want more for him. However, for adding some sophistication to 2 out of 3 dude roomies, as well as injecting sophomoric humor into the holiday spirit, I can forgive Nick’s lack of progression to cheer about and the wintery cold way in which Justin Long’s Paul was discarded in order to aid Jess’ own emotional development. “B” merry, New Girl fans!

– “I had thirteen years of figure-skating lessons before my mom sobered up and found out I was a boy.”

– Schmidt describing the perfume he made for Cece, “It has cocoa for your brown—ness, sea salt because it sounds like Cece, and sandalwood ’cause you up to no good!”

– “What are you doing?” “I’m eating cookie in the bathroom and avoiding confrontation.”

– “She said the sex is amazing, but she doesn’t wanna jump into anything…why am I talking?”

– Schmidt commenting on his Sexy Martin Luther King Jr character, “I could never get the voice right…”