It is interesting to note that the best part of “New Year’s Eve,” the Garry Marshall holiday clusterfuck of stardom, is the outtakes during the end credits. In them we see everyone from Halle Barry, to Jon Bon Jovi, to Seth Myers giggling through dialogue, tripping, and joking around with their cast mates. It’s thoroughly charming.

The actual movie could have taken a lesson.

Is anyone actually surprised that this movie is terrible? Even the trailer is so tone-deaf, so embarrassingly shallow, completely soaked in cynical Hollywood money, it would have been a miracle if the movie itself had been halfway decent. Surely even America, with its love of shiny white men and blonde Botox monsters, will see through this charade! Even we are not so dumb that we can be hoodwinked by a bunch of producers who took a lame, gin-sodden sketch of an idea, injected 45 stars at various stages of their career into the frame like steroids with private islands, and called it a movie! For the scales have fallen from our eyes! It’s our Arab Spring! Occupy everything! Viva la revolution!

But no. Many, many people will see this tribute to the dubious cultural touchstone of New Year’s Eve in New York City- just like many, many people will spend all day in the cold in Times Square on December 31st, waiting in line for the port-a-john and drinking surreptitiously from flasks before watching a giant ball of LED lights drop 100 feet. 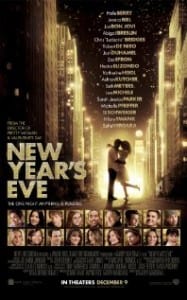 I hate to sound so bitter. But this movie really got under my skin, so much so that I don’t even want to go over the various intersecting plot lines and vignettes that fills the two-hour run time. Suffice it to say there are a lot of scenes that look like they were “Love Actually” subplots cut during the editing process, then swept up from the cutting room floor by Marshall and writer Katherine Fugate and reconstituted into some sort of narrative. The characters seem to be pulled from randomly from a hat, so Zac Efron is somehow the younger brother of Sarah Jessica Parker, Bon Jovi managed to bag Katherine Heigl despite being 16 years older than her, and Robert De Niro appears to be dying of the disease that only tragic Victorian heroines get after staying out all night in the rain. There’s also no time to actually get to know any of these people (the only character I can actually name is Bon Jovi, who has the weird and hilarious rock moniker of “Jensen”). But no time for characterization is actually a good thing, since it means that none of them have to display anything resembling a personality trait.

Michelle Pfeiffer comes close to actually acting, playing a downtrodden music industry paean who quits her job and asks Efron to help her complete her New Year’s resolutions from the prior year. Through the muck of the terrible dialogue there is a pulse of chemistry between Pfeiffer and Efron. Somehow I feel this would have been a much more interesting movie if it was just about them in a hotter “Harold and Maude” scenario.

The movie isn’t funny, it isn’t particularly sweet, and, like its predecessor “Valentine’s Day”, it spends most of its time trying to convince us that New Year’s Eve is a super-duper important holiday that has all sorts of meaning and significance! Like love and…family…and…whatever, everyone shut up and dance to “Firework!”

Halfway through listing all of the reasons I hated “New Year’s Eve”, it occurred to me that this is hardly the only piece of Hollywood garbage lobbed at the American public this year. Hell, it’s not the only one lobbed this week. So why do I hate it more than anything else I’ve seen this year? Why do I hate it more than “Transformers 3,” or “Gnomeo and Juliet”, and in such a visceral, gut wrenching, violent way? Perhaps because “New Year’s Eve” doesn’t even try to trick you into thinking it’s a film with any merit. It doesn’t have any sense of narrative, or artistry or fun. It doesn’t try to entertain you, or give you something to think about. It doesn’t even really have any characters.

Because the truth is “New Year’s Eve” isn’t a film at all. It’s an ATM.