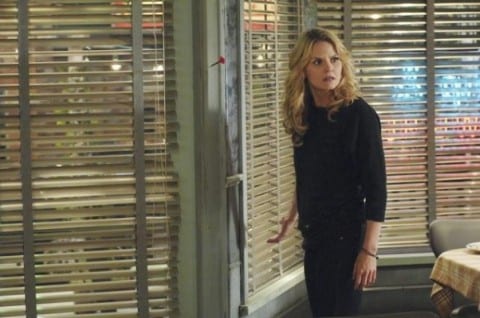 Emma (Jennifer Morrison) looking shocked after Sheriff Graham (Jamie Dornan) almost hits her with a dart trying to get her attention.

I’m starting to wonder if this is how Kitsis and Horowotz pitched “OUAT” to ABC execs:

“Hey millionaires! So remember LOST? Yeah, that sci-fi mystery show that got you awards and viewers all at the same time? Well, picture this in those money-grubbing noggins of yours…we take the most infuriating elements of that show, the endless barrage of questions with no answers in sight, and instead of a magical island we have a world where fairy tales are real!”

The execs respond: “It’s gold! With Disney as our parent company we will have no problem gathering the licenses for a treasure trove of characters people already know and love. They will be falling over themselves to watch the old, familiar stories while sticking around hoping that there will be some sort of new development, but there will be practically none!” (Maniacal laugh)

No, but seriously, would you be surprised if that was true? Several times we get vague references to what Snow White did to the Queen to elicit her vengeful spirit, but we still don’t know what that is. The show has been dangling this mystery for 5 weeks now, and every time it’s referenced I thank that spot in the ceiling I stare at and call God that I won’t have to agonize anymore, and then those strumpets at the OUAT writing team tease me yet again! Wicked temptresses, for God’s sake just tell me what Snow White did to her! Twice this week you awkwardly addressed that hideous elephant and nothing! The huntsman asks the Evil Queen directly, “Why do you want her killed so badly, what could she have done to deserve your revenge?” I practically shoved my ear into the TV so I wouldn’t miss a word, but all that witch could say is, “I told her a secret, and she couldn’t keep it.” UGH. Yeah, because that’s something. Oh wait, except it’s not! What kind of answer is that? Did she spread a rumor that you have an STD?

Seriously, that just multiplies the possibilities. Before last night, Snow White had owned up to her crimes and the Evil Queen divulged that her life was ruined thanks to Snow, and that is why she deserves to be cursed, and honestly I would have been okay of they just said how right then and there. Let’s pretend for a second that I would watch this show if I wasn’t obligated. Well, I’m not tuning in to figure out if Snow White really deserves to be cursed. Sure, I would be intrigued if cute-as-a-button Ginnifer Goodwin had a dark streak to her, but that would only be a small facet of my overall intrigue. What I’m dying to know, is will these people ever go back to Fairy-Tale Land, or will the real world become their Happily-Ever-After. Their constant cloudiness over this motivation to enact the curse is a pretty insignificant lynchpin, and clearly a ploy to make us care about the show’s season-long arc. For me it is accomplishing the opposite. If the thing that sticks out most about an episode of television is what I didn’t get out, that’s an ominous sign: a foreshadowing that the show has no goddamn clue where it’s headed.

Thankfully, it wasn’t all stalling tactics and we had both our first major character death and the first recognition of their previous life. Once again stealing from the pages of LOST lore, Sheriff Graham (a.k.a The Huntsman in FTL, Fairy-Tale Land) gets his first flashes of his bow and arrow slinging past when he kisses Emma because he “needs to feel something.” This theme of the vulnerability of feelings would be shoved in to as much dialogue as humanly possible, but all the same it worked for me, primarily because of how the actors were allowed to play with the “walls” we put up to avoid pain. Jennifer Morrison and Ginnifer Goodwin steal the show as always with their dynamic, as Mary Margaret starts to reveal her maternal tendencies (her alter ego Snow White is mother to Morrison’s Emma) as she cautions Emma about the pitfalls of emotional barriers: “Those walls may not let in pain, but they also don’t let in love.” It’s simplistic, and something we all encounter when we figure out too late we’ve fallen to hard for someone, but it felt sincere and Morrison played it with the same sharp-tongued skepticism, with just a dash of optimism. Maybe she is willing to share her heart with the Sheriff, but just needs a little insurance so that she won’t get crushed.

For this week’s fairyback we meet said Sheriff’s FTL persona, The Huntsman. I was captivated by this tortured killing machine who was raised by wolves, but was slightly confused as to why a man who cries after his kills (which evokes for me the ritualistic respect Native Americans would give their prey) would make a perfect assassin for the Evil Queen. Regardless, he takes the job and leads Snow into the woods disguised as a knight. She calls his bluff though, pointing out his lack of condolences given for the death of her father. He chases her through the woods for a bit, and predictably corners her. He’s puzzled that she has stopped to write a letter, and Snow asks him to deliver it to the Queen along with her heart. Oh, yeah, one badass detail I totally dug was that the Queen collects the hearts of her victims. Sweeeeeet.

When the Huntsman reads the letter of forgiveness and remorse he’s understandably touched, and he spares her. He tries to dodge the consequences initially by giving his boss the heart of a stag, but she is not easily fooled. In her rage she rips his heart out with her bare hands (also pretty badass) and stores it in a chest on her wall of fame for hearts, I guess. From then on, he is without feeling and is bound to her as a sex slave. Gotta say the kinkiness and gore was a pleasant surprise as the fairybacks continue, IMO, to be the freshest and most thrilling part of the show. The continued subversion of the typical happy endings indicates to me that the show could delve deeper and become an honest examination of how fairy tales aren’t all they’re cracked up to be. Here’s hoping.

Back in the less intriguing real world, Sheriff Graham has a vivid dream about a wolf while in bed with Regina (Evil Queen), still “trying to feel something.” And felt something he did indeed. Haha, oh sex humor. Anyways, the same wolf of his dreams appears to him in the streets and he starts to question what in the hell is happening? In his flash with Emma he saw himself lifting a knife up to stab someone who looked like Mary Margaret. He visits her, and we learn that no one seems to remember how they met each other in Storybrooke (more evidence of the curse), but otherwise she has no answers, but when he brings up past lives she directs him to Henry. Goddammit. Just when I thought it was going to be a Henry-free week. Much to the show’s credit though, we have been seeing less of him. Henry then shares The Huntsman’s story since that aligns with his flashes, and the Sheriff decides to follow the wolf as it must be his guide to the truth.

Along the way he runs into Emma, and together they inspect the forest the wolf leads them into, where they eventually end up at a large tomb. Inside, the Sheriff frantically looks for the heart that he’s convinced he doesn’t have. What else would explain the meaningless sex he’s having with Regina? I think it may have more to do with his penis than his heart, but that’s just me. Suddenly, Regina appears and is all like, “Why you snooping around my dad’s casket?” Then a sorta awesome, and much needed fistfight ensues between Emma and Regina, where Emma totally makes her bleed and Sheriff Graham tells her off claiming that it isn’t his heartlessness that’s the problem…the problem is her! GASP! When Regina tries to deflect the blame on Emma, she reminds Madame Mayor that Henry too ran away, and that maybe she needs to take a look in the mirror (HA!) and ask herself why everyone is leaving her. So what does Regina do? Oh….you know, what anyone would typically do in that scenario…climb down into the secret passageway under her dad’s casket, pull out the Sheriff’s heart and squish it into dust in her menacing grip. You know, the usual.

Though the act is cartoonish, but epic, the episode ends on a heartbreaking note as Emma finally does let love in. They share a romantic kiss and the electricity of it restores all of his past memories (again, just like the flash-sideways in LOST, where love and relationships triggered everyone’s memories), but immediately after telling Emma that he remembers he falls to his knees, dying instantly. The Regina death grip knows no mercy.

Yes, there is the emotional payoff and Morrison gets to show off her “heaving sobs while holding a dead body” chops, but it completely nullifies any advancement the episode made. The one guy who could prove that Henry was right dies as soon as he could provide that evidence. Again, if it wasn’t for the performances surrounding it all, the viewing experience would have been for nothing as we as well as the people of Storybrooke are none the wiser. Although, Emma certainly learned to not mix work and pleasure ever again, huh?

“OUAT” can both pride itself, and be ashamed for its consistency. All of the things I appreciate or even genuinely like are in full effect, but the gimmicky annoyances are always in rare form. So, for pulling my heartstrings in the Sheriff’s death (props to Jamie Dornan for going out with a bang despite little airtime to build up sympathy) and not compromising the darker sides of FTL, I tip my cap. But “Heart Is A Lonely Hunter” also dragged out needless mysteries, butchered a could-have-been thoughtful venture into vulnerability with repetitive, unsubtle dialogue, and shot the series in the foot by offing the guy who could have swung the momentum. This week’s OUAT is stag-nant (hehe, horse humor) and spurned by love again with a C+.