By Alex Lucier at Emmanuel College

The strange sport of curling first captured my interest during the last Winter Olympics in Vancouver. While not being recognized as an official Olympic event until the 1998 Nagano Games, curling’s roots actually go back as far as 1540’s Scotland.

I watched with fascination during the past two Winter Games, and also played the Nintendo Wii version of the sport. But it was not until recently that my dream to curl came to fruition.

My chance to hit the ice came two weekends ago when I was invited by a family friend to Petersham Curling club in Central Massachusetts. There I learned a few of the finer points of the sport that you just can’t get from seeing it on tv. 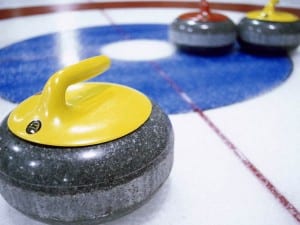 Each match begins with opponents shaking hands and saying “Good Curling.” The second tradition introduced by my instructor was that the winning team buys the losing team drinks after the game. So if you win you drink after, if you lose, you drink for free; being a loser has never seemed so attractive.

As the 44 pound granite rock roared down the ice towards me I began taking swift small steps until my speed matched the stone’s. Now shuffling right alongside it I was ready with broom in hand. Waiting forPhoto Credit: allbestwallpapers.com the team captain, called the ‘skip,’ to shout “Sweep!”

The two teams of four take turns sending each of their 8 stones down the 150 foot long playing surface. The ultimate goal being that at the conclusion of each ‘end’ (curling’s inning), you want one of your teams stones to be closest to the center of the target called the ‘house.’

Only one team can score per end, and does so by having one of their stones closest to the center of the 12’ diameter house. Each of your stones which also lays closer to the center than your opponents closest stone earns a point as well.

I ran track competitively from 6th grade through my senior year in college. I spent countless hours trying to perfect everything from using starting blocks to the long jump. The only time I saw a broom during that time was the people sweeping the sand back into the long jump pit.

Never before did I think that the time spent at my various jobs sweeping in front of a grocery store, and at a water park, and at the state park I now work at, would ever come into play in an athletic event.

The ice surface is not perfectly smooth. It has a uniform layer of small bumps referred to as ‘pebbling.’ Sweeping’s role in curling is to melt the ice in front of the stone and therefore making it smoother and therefore the stone moves faster.

The decision to sweep or not to sweep is made by the skip, as he is generally the most experience player on the team. It is his job to judge whether the speed the stone is traveling at will get it to its desired positioned.

Scotland is the birthplace of curling, and the only place in the world that the type of granite used to make the stones can be found. In fact there are only two quarries that the World Curling Federation have deemed as acceptable sources, and the second was found because the original island it was taken from was turned into a nature preserve.

Born in Scotland, with a large Canadian population of players, as well as a surprisingly large following in Asia, curling has grown into an international phenomenon. Luckily for those in the Boston area with an interest in curling there are several locations close by including: Broomstones Curling Club in Wayland, Cape Cod Curling Club in Falmouth, Petersham Curling club in Petersham, and also a Curling Club in Brookline. However, even the Brookline club’s website is private, so unless you know someone there the impression I am getting is: dream on.

And dream I will, but it won’t be in Brookline. So if you have an interest in gliding on ice, and throwing stones into houses, I hope to see you at one of the other curling clubs who actually make an effort to further expose eager enthusiasts to their spectacle on ice.