“I have tattoos because I feel they enhance my body aesthetically. They are a way for me to bring a part of my personality literally to the surface of my skin.”

Almost every guide to professionalism makes a point of condemning the tattoo junkies from displaying their latest tribal symbol or finished sleeve. Necks, faces, wrists, hands and sometimes shoulders are some exposed areas of the body in which sporting a tattoo may not go over too well in the office environment. It’s becoming more common, however, for job seekers to show their tats proudly, whether traditional employers like it or not. 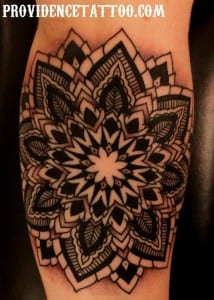 Fortunately for this coffee barista, her five tattoos didn’t stand in the way of starting her gig at Coffee Exchange, a renowned café in Providence.

When asked about the impact that her tattoos have had on her job, Lexi replied that, “I may work at a coffee shop but I also work within their office. And, even though I work in an office setting, I have never felt the need to hide or conceal them. I receive compliments on my tattoos while I’m working all the time.” Lexi not only got accepted for the job with her tattoos showing, but also received a raise and, shortly after, a promotion as the organization’s administrative assistant.

Tattoo parlors are popping up everywhere, perpetuating the desire to get tattooed. From media outlets to technology enhancements, it seems that tattoos are showing up more often and may begin to alter the traditional expectations for interviews, conferences, internships and other opportunities that involve the element of appearing professional.

But let’s be honest. A café isn’t going to uphold the same dress code that law firms and high-ranking corporations require. The upcoming working generation, however, may change the norm of attire in even the most pristine business settings. Young adults in their early 20’s, such as Lexi, find it more common to have at least a tattoo or three before feeling like a rebel. Lexi represents the general point of view of her contemporaries when saying, “Proof that our generation is changing the way people view tattoos is everywhere! When I meet someone my age who doesn’t have a tattoo, I’m slightly surprised.”

From the way things are going, it wouldn’t be a shocker if tattoos started showing up in more professional settings. But what about now? Should young adults keep themselves from holding back by showing who they are through body art?

Dan Jalbert, assistant director of Emmanuel College’s Internship Career and Development office, has more to say on the matter. Individuality is important, but when it comes down to it, “while you may be a 20 something year old, you may be interviewing with someone in their 50’s or 60’s who puts a great deal of value and emphasis on traditional interview attire.”

Should the upcoming job seekers feel concerned about their tattoos? Could it be that our sense of fashion must come to a halt once we enter the networking world?

No need to fret. For those of you who are nervous, however, there is an array of options. As everyone knows, there are more places to get tattoos than your forehead or other obvious parts of the body. Let’s keep in mind that we not only have conservative clothing at our disposal but also the use of Band-Aids and other concealing tools to mask one’s expression of individuality. These quick fixes can be used for the entire time working within a more professional culture or at least for the interview.

The diversity of the work force is also key to keep in mind. Dan makes a point by mentioning that tattoos are, “definitely more accepted and normal in certain fields. Although, since you never know for sure what kind of person you’ll be interviewing with or working under, it’s better to be safe than sorry.”

With professionalism 101 in the back of her mind, Lexi has found an openness to the idea of covering her beloved pieces of body art if her occupation takes her elsewhere. For now, however, she keeps to her passion for writing, art, and distinctiveness.

“In a setting where I need to convey serious information without distractions, I would consider covering my tattoos in some way. Other than that, I actually feel incomplete when my tattoos aren’t showing. They are a part of me and I don’t see myself ever regretting the art I have chosen to carry for the rest of my life.”