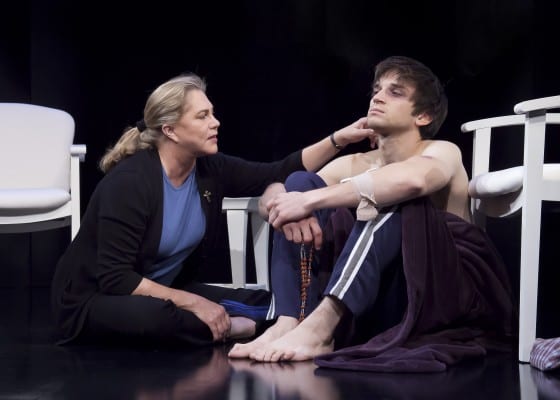 In “High,” Kathleen Turner plays Sister Jamison Connelly, a tough-talking nun with a rocky past, whom a shady priest strong-arms into counseling a hopeless-seeming recovery case: a godless, drug addicted, gay street hustler.

Turner’s character narrates the tale. Arguments with the priest and sessions with the troubled youth are interspersed with soliloquies, in which she offers up memories from her wayward past as puzzle pieces that will ultimately reveal the story behind her strength, vulnerabilities and faith.

When she first speaks, it’s exciting to hear that distinctive voice of hers: a growl that sounds like it’s been caressed by years of cigarette smoke and washed down with whiskey, pinched a little by the slimness of Turner’s nose. She works this instrument into a steady rhythm which serves the caustic quips she constantly fires off, but which never varies much across the play’s peaks and valleys.

Not that there are too many of these. Shortly after Cody Randall (Evan Jonigkeit) our snarling, spiky-haired street urchin enters Sister Connelly’s office, we see how things are going to be. He rolls his eyes at the prospect of being helped and tries to hide behind silence or apathetic mumbles or shock value. She is surly and unimpressed and her tough love approach wears him down quickly. He lowers his guard and reveals more and more elements of his tragic story.

Somehow however, these sessions are being undercut. Connelly knows this has to do with her boss, Father Michael (Timothy Altmeyer) who is of course, hiding something difficult in his own past, but this the Catholic church and hierarchy rules. Not allowed to be as tough with Randall as she would like to be, the only tool she has left to offer his faith. But will this be enough?

I found myself not particularly caring. The tough nun, the shady priest and the troubled youth never branch off far enough from these basic characterizations. They never show much capacity for change and while they sometimes raise their voices, they never really break a sweat. They just each reveal more and more of their emotional damage until the pity party is complete. I suppose the appropriate thing to do is to forgive them. I wish Turner a more inspiring vehicle for her next project.

“High” is written by Matthew Lombardo and Directed by Rob Ruggiero. It is presented by Ann Cady Scott and Timothy J. Hampton in association with The Repertory Theatre of Saint Louis and AE Stages, and plays at the Cutler Majestic Theater through December 11.