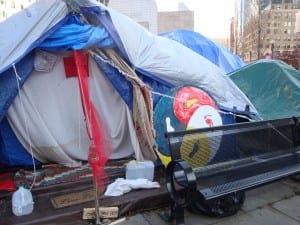 Despite the rain, well over 100 activists gathered at Dewey Square for an emergency General Assembly of Occupy Boston at 7 p.m. Wednesday to discuss what to do now that Suffolk Superior Court Judge Frances McIntyre has lifted the temporary restraining order protecting the camp from being raided or cleared out by the Boston Police Department.

According to McIntyre, “the injunction is denied because, while Occupy Boston protesters may be exercising their expressive rights during the protest, they have no privilege under the First Amendment to seize and hold the land on which they sit.”

With visibility blocked by umbrellas and cameras, the general mood of the assembly was one of excitement and resolve rather than panic. Many reported that connections within the Boston Police Department said that no raid would take place last tonight. Ben Wish, a lawyer for Occupy Boston speaking at the General Assembly, assured those assembled that no police action will be taken immediately. But others, especially non-locals, sent different reports. @RyanRiceLA, for example, tweeted “#OccupyBoston has SWAT staging 4 raid” and @Occupy_PolicePolice wrote “ALERT! Spec Ops Staging in BOSTON NOW!”

The city stated clearly on Wednesday that no police action was imminent.

In the wake of the decision, a spokesperson for Mayor Thomas Menino’s office said:

“We are pleased with Judge McIntyre’s strong decision to repeal the restraining order that prohibited the City of Boston from removing the Occupy Boston camp at Dewey Square. We applaud the judge for clearly recognizing the City’s authority to protect all of our residents, including those currently at Dewey Square. Our first priority has always been and will always be to ensure the public’s health and safety. As outlined in the court proceeding and affirmed in the judge’s ruling, the conditions at Dewey Square have deteriorated significantly and pose very real health and safety risks. The city strongly encourages the Occupy movement to abide by the Rose Kennedy Greenway regulations and remove their tents and refrain from camping in that area. Today’s decision provides clarity surrounding Occupy Boston’s status at Dewey Square and the city will act appropriately to fulfill our duty to preserve the public’s peace and safety.”

The American Civil Liberties Union of Massachusetts and the National Lawyers Guild-Massachusetts Chapter released a statement which said, in part:

“We are disappointed with today’s decision and are reviewing the decision with our clients to determine all their options. The Occupy Boston community is making a significant contribution to national discussion of important issues – not merely through what protestors are saying, but their modeling of an alternative to what they see as imbalances and injustices in our society. Just because the court ruled today that the city can shut down the encampment at Dewey Square does not mean that it should. As city officials have repeatedly – and recently – stated, there is no immediate need to remove Occupy Boston from Dewey Square. If city officials decide, nonetheless, to do so, how they go about it also sends an important message. Occupy Boston has always been a peaceful political protest, aimed at drawing attention to the growing inequalities in our society. At a minimum, Boston city officials and the police must exercise restraint and respect with regard to the Occupy Movement and the concerned citizens it represents attention devoted to Occupy sites, and most articles, per journalistic custom, restate the Occupy position…With the exception of the heavy-handed removal of demonstrators from the Rose Kennedy Greenway early in the morning on Oct. 11, Boston has already become a model of respect for freedom of speech to other cities around the country, where Occupy encampments have been broken up with levels of force that have even shocked people who were not involved in the Occupy movement or sympathetic to its aims. Boston, as part of the long New England tradition of town meeting and grassroots democracy, has an important role to play again in how it responds to today’s decision. We believe that Boston can – and must – set an example for the entire nation in protecting the rights of Occupy Boston participants.”

A activist who is the principle maintainer of the Sign Tent at Occupy Boston and uses the name “Guy Sands” when talking to the press explained, “I feel, personally, based on what the mayor has put out consistently, that they’re going to act within the near future to remove Occupy Boston from Dewey Square for violations that they won’t let Occupy Boston remedy.”

He added: “I feel this ruling is somewhat confusing in that the violence towards occupy seems to be the rational used to say that the ‘public’ doesn’t understand the message and that the police reaction is why she judges that Occupy Boston is not expressive speech. I also think the statement in ruling ‘There is scant evidence of how the occupation began’ is foolish due to the sheer number of media articles based in fact, reporting the entire occupation. I also feel that due to the Mayor, police superintendent, fire marshal, and code inspector all making statements about removing Occupy Boston have spoken for themselves regardless of the Mayor’s statement today that there is no plan in place to remove Occupy Boston.”

Speaking at the rainy and muddy General Assembly, Occupy Boston lawyer Ben Wish said he will appeal Judge McIntyre’s decision today. When he mentioned the possibility that Occupy Boston protest might move to the Harbor Islands – the only legal campground within city limits – the crowd responded with laughter. Jeff Fueur of the National Lawyers Guild, speaking at the same assembly, reiterated Wish’s belief that no raid will occur immediately.