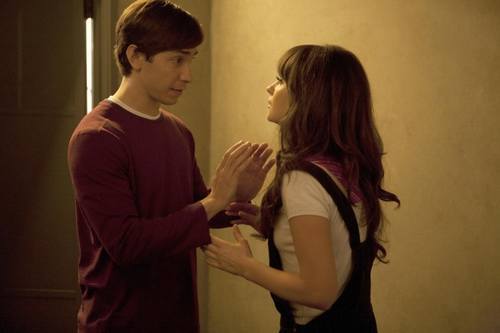 The New Girl writers accomplished something remarkable with this episode. They managed to make Zooey Deschanel, one of the desirable women in show biz, unequivocally un-sexy. I’m aware this sounds like sacrilege to some, but trust me. Awkward achieved new levels in the climactic sex scene between Jess and Paul (Justin Long). But was it funny? EHHHHHHHHH.

For me the episode started off really strong, and organic. Jess and Paul are coming in from a presumably good date, taking off each other’s clothes in the entryway. Nick looks on from the couch in a judgmental, yet almost longing way, which seems to suggest the writers definitely want to pair them off down the road, but I can only handle one grievance at a time. Then as their panting and ecstasy wanders into her bedroom, Jess suddenly seems to realize that sex is about to happen. She sings a little ditty about “Intercoooourse” and then excuses herself to the loo. Then she endears us to her, yet again, when she motivates herself in the mirror and high-fives her reflection. A sharp cut later, we see no sex was had.

Her hesitations are understandable considering she hasn’t had sex since she broke up with Spencer after catching him in the act of cheating (her reason for moving in with the guys). As a result she has attributed his philandering ways to her lack of sexual prowess, and therefore feels she needs to be more adventurous. This is the obvious set-up for the hilarity to ensue as Jess shops for lingerie that would function better as a straight jacket, and raids Schmidt’s “red folder,” subjecting herself to 5.5 hours of the hardest of the core porn (from the audio it seems there were chainsaws and dogs involved at some point).

The guys were largely in the margins for this episode, which for me spelled danger. Thankfully, Schmidt got the most airtime, and continues to be my favorite character. Working in an office with all women certainly explained some of his behavior (some, not all) and seeing him struggle to be accepted was both funny and sad. It’s always a neat trick when a character can be both pitied and adored, and this episode added to the arsenal, providing us with more reasons to love and loathe douchebag with feminine tendencies. Despite not being asked, he begs his boss for an invite to her baby shower. Eventually he coaxes it out of her and vows to be the life of the party. At first he comes up empty (he thinks afterbirth is like an after party for the birth). Then he channels his frat boy side and turns the classy feminine affair into a full out raga. He even scores some drunk co-worker tail! Small victories, Schmidt. Small victories.

Nick and Winston were almost non-existent. Nick needs a haircut badly, but doesn’t like being forced to converse. This leads to a couple belly laughter visual gags. One, Nick finds a home haircut video on YouTube, but then the guy in the video gashes deep into his head, drawing a bloody geyser. Winston’s response, “Can we watch that again,” was expertly timed. The second is when Nick returns with a high-top fade and Jess refuses to take him seriously when he tries to bestow advice.

The centerpiece of “Bad in Bed,” the role-play scene between Jess and Paul, was well-acted and elicited a few chuckles, but it failed Jess by crossing the line. Jess leaped over the boundary of being adorably inept to disturbing and uncomfortable. because it made her out to be someone who doesn’t pick up on social cues to such a severe degree you aren’t sure how she would even have a job. It’s starts off silly, Jess sounded like a 40’s newspaper man and Paul imitating Jimmy Stewart. Then once it gets to be too complicated of a performance Paul suggests they stop pretending. Then once they share a tender kiss, Jess starts to choke him because she saw it earlier in a porno. I see the setup for the joke here, and I knew Jess was bound to try something awkward, but choking isn’t like someone bringing up a taboo topic at the dinner table, it’s violent and psychotic. If the show hadn’t done such a great job gaining my adoration for these characters I might have a harder time tolerating that scene. But I have the capacity to forgive their miscalculation. In the future though, “New Girl,” you can make Jess clueless and awkward, but don’t make her do things that seriously hurt other people. Then it is no longer funny, because we start to wonder if she might “accidentally kill all her roommates in her sleep.

Ultimately, no harm is done. Jess apologizes, and both Jess and Paul express their anxieties and admit they are products of the butterflies swirling around in their tummies when they’re together. Jess then FINALLY shows some competence and agency at the end of an episode, (most have notably ended with the roommates pitching in to help her “to show they care), and seductively kisses Paul in the elevator. Predictably they stop the elevator for a quickie, and the fellas are none the wiser.

My critiques with this episode may come off a lot harsher than the grade would reflect, but that’s mostly because I still enjoy this show immensely. Spending time in the apartment week-to-week is a ball, much like it was on “Friends.” Every week, you had your “Friend” that was annoying and whose jokes weren’t hitting, but you tuned in knowing that overall you wouldn’t be sorry you tuned in. Schmidt was that reason for me this week, and the Jess from this first half of the episode delightful. She was in over her head and in her attempts to feel in control she had a few memorable lines (see L.O.L.Ls below), but when she veered into insanity I wanted very badly to check out.

As long as the show remembers who these characters are and doesn’t deviate simply for a cheeky premise the show will be fine. Some particularly strong L.O.L.Ls in the episode’s first two acts and a solidly executed B-plot for Schmidt “Bad in Bed” out of a frankly deserving C range, but for relegating Winston and Nick to second-class citizens in terms of airtime, and causing me concern for Jess’ mental health I reluctantly seal this deal with B-.

– Jess on sex with a new partner: “It’s like starting a new job with a really weird interview.”

– “You’re like a Bond villain, you just told me you whole plan.”

– “Everything I know about sex I learned from Spencer, or the Clinton impeachment trials.”

– “I’m gonna need me some coral polyps because this starfish is hungry!”

– Schmidt on what Nick and his ex, Caroline, sounded like in bed in college: “You sounded like a rescuer talking to a trapped miner…Oh, oh yeah, are you okay down there?”