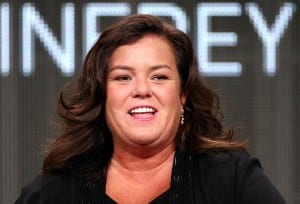 Rosie O’Donnell and her girlfriend, Michelle Rounds, are engaged. The TV Host announced the engagement to the audience of her program, The Rosie Show, on Monday. On Friday, she tweeted a link to a picture of Rounds with the caption “happy – in love”.

O’Donnell and Rounds met earlier this year in a Starbucks. O’Donnell recently said of their relationship “It’s fun and very exciting. I did not expect it.”

O’Donnell publicly came out in 2002 and was previously married to Kelly Carpenter, before separating in 2007.