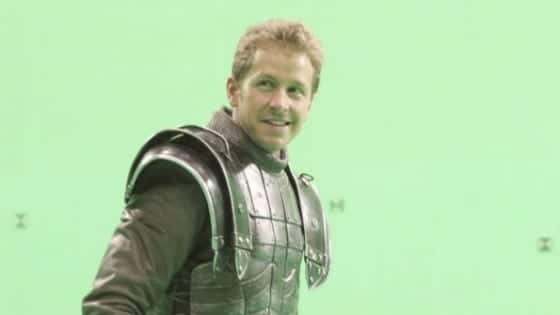 Josh Dallas as Prince Charming, filming his fight sequence in front of a green screen

So, in reviewing my review (cue Twilight Zone theme), I realized that in some ways maybe I was going to easy on the show. Granted a commenter (shoutout to Ablenight) felt the opposite, but I still think that I was grading this episode based on potential, on what I hoped it would become, both as a “Lost” fan rooting for Kitsis/Horowitz and as a TV fan who would love to see a quality fantasy drama on network television. I’m not ready to declare “Once Upon A Time” D.O.A yet. Truthfully, I liked a lot of what I saw last week, but because I was grading based on effort, this week’s installment takes a slight dip.

Not going to lie to you OUAT fans, most of the goodwill garnered by The Shepherd is based on a limited supply of Henry. He served his purpose, to explain to us his theory (or let’s be honest, he’s a mouthpiece for the show, so this is “the truth” as we know it) that David does not remember he is Prince Charming nor his life prior to the coma because he is has some sort of curse/amnesia hybrid plaguing him. Okay, little dude, now run along.

Once that was taken care of and we were transported into Fairy-Tale Land we were treated to a battle royal between Charming and….some Orc looking fella. Treated may be too nice of a word though. I might use subjected, because the special effects were God awful here especially. Cuts were taken too sharply and I struggled to follow the movements of both fighters, and the foggy cliff  green screen made everyone look like they were figurines up against a moving poster board made for a 5th grade science fair. Mind you, that’s me being kind.

However, when Charming got stabbed through the heart thinking his opponent was down and out, I got quite cheerful. Sure, death by sword is always awesome, but this particular reaffirmed to me the show’s commitment to subverting Disney lore with a bit of existential cloudiness. These magical beings, the ones we were so mesmerized by as children, can be made pawns of a cruel universe. Call me dead inside (I mean, that would be factually correct), but that is a great route for this show to go. The commonly held belief by Henry the Great…Pain in my Ass and OUAT-ers (?) is that Fairy-Tale Land will be their salvation. I personally would love to see the more complicated real world be a source of comfort and, heck, just as enchanted with potentials for happily-ever-after.

Due to Charming’s unexpected demise, King George (played by LOST vet, Alan Dale, who brings the same grab-life-by-the nuts attitude Charles Widmore had, to the role) consults Rumpelstiltskin. Initially, I was annoyed that Rumpelstiltskin and his fineprint-type deals would again be integral, but Carlyle’s silver-tongued demon is the best thing the show has going for it, so why not? I just wish they could diversify the baddies, or simply make the “good guys” morally gray through their own choices, as most trailblazing dramas of the last decade have. Then again, I suppose you could argue Rumpy is a conduit for evil, not a harbinger of doom himself.

King George’s predicament is this: he’s without a son to slay the dragon that threatens King Midas’ kingdom. This is personally taxing because his own kingdom is in need of gold. And well, Midas has a lot of it considering every thing he touches literally turns into gold. White people problems, huh? Rumpy doesn’t sympathize because he was the one that bequeathed Charming to him in the first place. Of course, he is always willing to make a deal so in exchange for whatever he wants, he will give King George the up-until-now secret twin brother. At first, I wondered whether the twins were Cinderella’s, but that wouldn’t work given the timeline established two episodes ago. Alas, it’s just another long lost sibling deus ex machina, which is expected, but still disappointing.

In the real world, David (Charming’s “real life” name) is having an identity crisis too. He understands that he was married to Kathryn, but doesn’t remember falling in love with her, and certainly doesn’t feel the chemistry now. He definitely has the hots for Mary Margaret (Ginnifer Goodwin) though, and who could blame him? She’s friggin’ adorable, and she saved his life. That must be true love! I’m being facetious, obviously. The duo does set off sparks when they share the screen, but this will they/won’t they is wearing slightly thin. I enjoy their interactions, and Goodwin especially has the natural sweetness to pull off “sweet girl who falls for the wrong guys,” routine with sincerity, but what seems like an unsettling question isn actually destiny.

I have no reason to question that they will get back together even when David steps into Mr. Gold’s (Rumpy as real-world sleaze) pawn shop and eyes a windmill that jogs his memory. For an object that feels like it should be Chekhov’s windmill, something that was planted beforehand and emphasized so that we know it will resurface, I have no idea what it means. It was mentioned once when Kathryn was trying to jog David’s memory of their past life together, but is it somehow enchanted in Mr Gold’s shop? What memories does it conjure up? Much like the “twist” at the end of last week’s episode, I’m intrigued, but it feels like contrived, like I’m being manipulated to care.

And there is a lot I actually care about. For one, I care about Emma finding her place in Storybrooke. Her story gets a similar “men will disappoint you” treatment when she sees Sheriff Graham climbing out of Regina’s window during her midnight rounds. It was funny to see him shimmy down (shimmying is, after all, ridiculous), yes, but when we see Emma shake her head, we sigh, knowing her pain and wishing she didn’t have to be so jaded. Earlier, when trying to ease Mary Margaret’s mind, she laments her bad decisions with men and says that whenever she has had a hunch she was doing the wrong thing, it was wrong. This futility is relatable, and I’m invested in her and Mary’s happiness. But with Mary, there’s no indication that Fairy-Tale Land’s prophecy will not come true.

You know, that may be a huge problem with the show as a whole. A lack of surprise. I am continuously surprised by the grim truths our Fairy-Tale inhabitants must face. The realization that Prince Charming 2.0 could never see his mom again or the entire kingdom would fall apart is an impossibly huge, but nonetheless horrible, burden for a small farm boy to handle. I couldn’t help but think of Luke Skywalker, hopping on a speeder to Mos Eisley Cantina with a Jedi Knight only to come back to his farm and find his adoptive parrots charred to bits by the Empire. This Momma’s boy commiserated with Charming 2.0, because mothers can be amazing supports that you always want to have in your arsenal, and to lose that security is to not only lose love, but lose a bit of yourself. Those same kinds of stakes don’t exist in this show’s “real world.” Yes, at episode’s end David is trying to make things work with Kathryn and Mary Margaret is double-fisting drinks with a douchey doctor, but does anybody doubt at all that Henry is right and Emma will somehow break the curse and bring happiness for all Storybrooke’s townsfolk again? I’m more invested in the dark underpinnings of how Fairy-Tale Land came to be a breeding ground for widespread joy, the idea that Happily-Ever-After comes at a price that MUST be paid. If Happily-Ever-After has already been achieved, then it won’t be long before the magical reset button is hit.

Unless the show can convince me soon that Fairy-Tale Land was flawed from the beginning, that this curse is actually a road to redemption for these characters, and that they can only truly achieve happiness beyond the magical bounds of their homeland, then I might return to my faith of weeks prior. Right now, I just can’t see the magical forest through the singing trees, or whatever tress do in fairy tales. I’m seeing a formula at play, a formula that indicates a fairyback (a fairy-tale flashback, a term coined at The AV Club http://www.avclub.com/articles/the-shepherd,65911/) for each major character that provides insight into how each of them has been effectively pushed away from their paths to true happiness (whatever they think that is) by the curse. But through Emma-induced miracles, happiness starts to become reality and the Queen’s curse is rendered powerless. Storybrooke is no longer appears as a backwoods town in Maine, and is restored to it’s storyBOOK sheen. To me, that end as telegraphed is not exciting or rewarding. This would only reinforce that magic, an unattainable, intangible force (like fate) is what we need to be happy. Wouldn’t it be an even greater Happily Ever After, if it we could find it within ourselves?

I’m not ruling out the possibility that OUAT could rise to the heights of inspirational, emotionally resonant and fulfilling entertainment. “Lost” did it on ABC, why couldn’t this show? But I can only consider what I’ve been presented with thus far, and what I’ve seen is a lack of improvement week-to-week, or rather a complacency to stick with what works instead of expanding upon those strengths. “The Shepherd,” was especially frustrating, too, for its sloppy use of special effects during the Prince’s battle sequences. In spite of a host of consistently compelling performances (of which I would now include Josh Dallas as Charming/David and vehemently exclude Lana Parilla as Regina/Evil Queen and Jared Gilmore as Henry), I have my made my choice, C+.