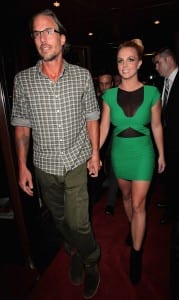 Britney Spears’ relationships haven’t always been ones to look up to. But, the recently turned 30 singer seems to have gone right with Jason Trawick, a former agent for William Morris Endeavor Entertainment.

The couple has been together since 2009, when Spears reportedly “made the first move”. The two first met while Spears was still married to Kevin Federline, but a source says that “Britney has liked Jason for a long time”.

Spears praises Trawick’s bond with her sons, saying “Jason is just amazing with the boys. They look up to him so much – they adore him. He’s their hero”.

In an interview with Us Weekly, Spears said “Never say never!” to the possibility of a third marriage with Trawick. Maybe third time will be the charm.