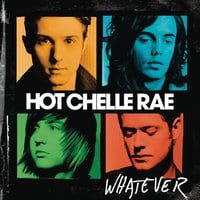 “Whatever” is an appropriate title for Hot Chelle Rae’s generic second album. The Nashville-based quartet’s style of dance-pop/wannabe-rock has been done before, and it certainly has been done better by more talented pop-punk acts. Each track is basically just a slight variation on the last, the lyrics are clichéd and often cringe-worthy, and the vocals are decent at best. Yet despite the fact that there is nothing particularly good or original about the album, these choruses will indubitably get stuck in your head. They are just so catchy. Ultimately though, it’s fluff — enjoyable enough for a tween party or getting down on the dance floor, but not an album that is going to have any sort of lasting influence.

Hot Chelle Rae released their debut (“Lovesick Electric”) in 2009, but it wasn’t until the obnoxious yet also strangely infectious “Tonight Tonight” off of “Whatever” started blowing up the radio airwaves this year that they really gained popularity. An actual sample of lyrics from this song: “I woke up with a strange tattoo / Not sure how I got it, not a dollar in my pocket / And it kinda looks just like you / Mixed with Zach Galifianakis / La la la, whatever, la la la.” You’ll probably be rolling your eyes at least a few times in every song, but then the hooks will start back up and suck you in again. It’s a vicious cycle.

Somehow, the band managed to win the New Artist of the Year Award at the American Music Awards last month. Snide comments about what this says about today’s music scene aside, Hot Chelle Rae is by no means the worst thing on the radio right now. The glossy pop is certainly a guilty pleasure, and perfect for those who don’t look much further than Katy Perry and Lady Gaga for their music collection. But if you’re looking for a creative and inspiring new record to listen to, “Whatever” is definitely not it.