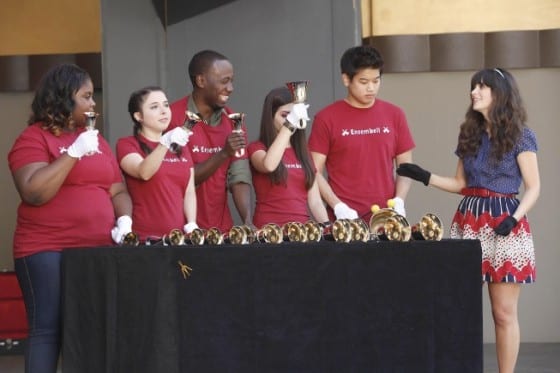 Hey, this is Chris Peck, new intern and TV critic, and I will be covering “New Girl” for y’all every week. Since this is not a plot-intensive comedy I feel like we can jump right in with this week’s episode.

When one commits to watching a show week-to-week they do this because there is something or someone that they can’t resist tuning in for. For me, that’s Schmidt (Max Greenfield). At first, I was very wary of the guy who required his own “douchebag jar” to keep him in check. But as the series has progressed, the writers have broken down the facade and exposed a neurotic, cleanliness-obsessed, trend-dependent soul who is quite vulnerable in what used to be an all-male living situation. But as Jess infiltrates the group, Schmidt’s more obnoxious tendencies reveal themselves, and to me it is a lot of fun to see what Schmidt will fixate upon each week.

It would seem odd for a show that was conceived as a Zooey Deschanel vehicle to invest so much comedic material in one of “the other three roommates,” but Greenfield seems up for the challenge. In what would be considered the B-plot, Schmidt faces off against resident straight man, Nick (Jake M. Johnson). The clash begins when the toilet begins to overflow and Nick, a self-proclaimed self-reliant, uses a soda bottle in the wall (I really don’t know how that works) and the plumbing is functional again. For Schmidt, functional is not good enough though. He wants a “fancy fix.” A “fancy fix,” in essence, is to throw money at the problem so that the mechanical issue is permanently and neatly fixed, not abated by a temporary solution.

Nick takes this to heart when Schmidt offers to pay a plumber. He believes he is above Schmidt’s “charity” and they two begin to dig at the class divide they have seemingly ignored before that point. What ensues is a battle royale of one-upsmanship. It begins with Nick refusing to sit on the couch Schmidt bought, Schmidt retaliates by putting all of Nick’s freezer food on his bed because Schmidt bought the freezer. Before they are civil enough to talk it out it culminates with Nick squeezing the couch and freezer into his bedroom since they are his property. The tete a tete may seem callous, but it points to an underlying issue: Nick chose to be a bartender and drop out of law school, so he can not resent others for their success. He may be crafty, with great methods for makeshift mechanical band-aids, but he should not condescend others that hire workers to complete those kinds of menial jobs.

Between the honesty divulged, the ample physical comedy of the moving property, and lines like, “These are the kinds of things that come out when you take another man’s conditioner,” I was fully absorbed in this petty feud, which ended artfully. There was no neat sitcom bow, nobody hugged it out (sorry “Full House”). It ended with a light hearted jab. Nick rags on Schmidt’s cardigan because…well it’s a dude wearing a cardigan, and that’s that. That is how a guy’s relationship can be: full of underlying tension, but they are there for each other when they need to be. Nick reflected with Winston on the roof of their loft about the men they had become in spite of their ambitions, but that was as close to a “You know what I learned something today” moment (a la South Park) as the episode got.

Now the main plot was less of a revelation. Though it tickled my funnybone and I was glad to see Winston (Lamorne Morris) with more to do this week, I didn’t learn all that much about him and they needed a fairly absurd plot to get similar results to the Nick/Schmidt conflict. Jess (Zooey Deschanel) unexpectedly brings a group of four troubled kids to the loft because they have chosen to forego detention to play handbells with Jess, or as they know her, Ms. Day. Not sure why this obscure instrumental group is Jess’ first choice for alternative detention, but it does elicit the most purely hilarious visual gag of the episode, which is Winston’s prowess with the handbells. A visionary from the minute he touches them, he signs on to assist Jess in helping them rehearse for an upcoming concert in the park.

Ultra-competitive perfectionist Winston is then unleashed upon the children and it results in lowered self-esteems, a lingering sense of defeat, and a shotty rendition of “Eye of the Tiger.” Jess is then forced to kick Winston out of the group because he is making “Ensembell” (kind of a groaner, but also awesome) all about him. Granted, he needed the hobby, being unemployed and all, but Winston clearly lost sight of why they were playing handbells at all. It wasn’t about being the best, sinking that shot at the buzzer. It was about applying his talent towards helping the kids achieve their own success, by passing the ball to them in the waning seconds. As mentioned, the two plots converge and a genuine pal-to-pal reflection takes place between Nick and Winston as they collectively call out their bullshit: if they are unhappy with their lot in life it is up to them to change. The success of those around them is not there to be a challenge or source of resentment.

The “New Girl” herself and I have a fluctuating relationship though. Though she was endearing this week as a teacher with a humble mission to give troubled teens something to care about, her jokes mostly echoed, “Look at me I’m adorkable, and I react to everyday life with an undeniably cute zaniness!” Though one line in particular made me laugh out loud, “Did we get robbed by giants,” she didn’t add much for me except a moral compass, which felt too sitcom for this show that is usually so emotionally understated. I suppose the Schmidt/Nick screaming matches killed any subtlety of feeling for this week though. However wishy-washy my feelings for Zooey are (one week she is too sweet for words, the next I want her lovable ass on the street), I was pleasantly surprised by the serial productivity and overall hilarity that stemmed from these two confrontations. In lieu of the gang of misfit hand-bellers being subjected to backdrop and Winston’s one-notedness as a competitor, I cannot justify an A range grade. Although due to my continued fascination with the experiment in metrosexuality that is Schmidt, and a solid execution of parallel squabbles centered around self-sabotage, I will bestow a ringing B upon “Bells.”

This will be the section of the review where I post my favorite lines from the episode.

“Ooo, look, goose pimples. Each one, a memory.”

“[Eye of the Tiger is] so cool it ended the Cold War.”

In reference to Midori Sours: (Screaming) “It is a melon liqueur, an American classic with an Asian influence.”

“You did not make me want to throw up.”

“I can’t hear you over your cardigan. I just hear…’Cardigan, cardigan, you’re wearing a cardigan.” “You don’t like the cardi-?”