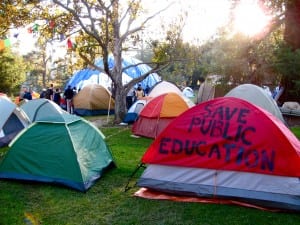 DAVIS, Calif. — The holiday weekend was very quiet around Davis. Only the remnants of the infamous pepper spraying incident remained. Although a bounty of tents could still be found on the quad, a mere handful of protestors could be found in them. Then Monday morning arrived. Once again, one by one, news vans crept back onto campus as if waiting for blood to be shed.

The UC Davis General Strike that began early Monday morning has yet to disperse. Beginning at 8:00am with a yoga class, students and professors gathered on the campus quad to take part in the various ongoings of the day. Some professors chose to move their classes to the quad while others decided to simply cancel the scheduled lectures in solidarity with the strike. When the option is either attend class and do nothing but discuss the strike or to not attend class and thus be taking part in the strike, it seemed to many that the strike was unavoidable.

Various artistic expressions of frustrations took over the quad in solidarity for the strike and ongoing protests. Signs such as “The Chancellor was appointed, so was Hitler,” “California RNs support Occupy UC Davis,” and “I’m queer; I’m for justice” could be found throughout the conglomeration of protestors. Once again, no clear cause was present. “There is no singular cause by design,” graduate student and current protestor Susan Richardson explains. “There is no singular statement regarding the protests for a reason. We want everyone to feel like they have a place to voice their frustrations.”

It thus appears that the protests are an aggregate of individual frustrations, and the protestors are aware of this. For one student, Eric Lee, the protests and general strike are part of a much larger goal. “The General Strike is part of a greater movement against all forms of social inequality that have all stemmed from capitalism,” Lee states. Professor Clover sees the focus of the protests geared toward privatization and austerity and further claims that this has been the focus all along. “I think that the focus of the protest is against the ongoing privatization of the university, and that takes many forms, from high costs, to compulsory debt to the use of militarized cops to impose policies the students find intolerable,” Clover says.

Written in chalk on the walkway in the pathway of the quad is what appears to be a revised Preamble that possibly encompasses at least several of the ongoing protests. This informal documentation states:

For others, the bigger picture is derived from a different perspective. “I don’t think the protestors realize the long term negative effects the protesting is having on both the students and the university as a whole,” one UC Davis alum stated. Others think that UC Davis is only being portrayed in a negative light. While making international news is quite the achievement, doing so in this manner is anything but ideal. Others don’t understand why not attending class is the right choice to make. For these students, the strike does not portray that students are serious about their education, for why would they not attend a class if they wanted to be educated? The irony from the strike further exists when the protests against tuition are taken into account. When this quarter’s tuition has already paid for classes, why not attend and get your money’s worth?

In regards to the protest against Chancellor Katehi, the tension seems to have died down a bit, but some still stand unwavering in the demand for her 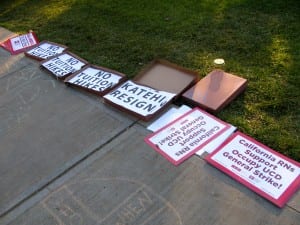 resignation. “I concur with the idea that Linda Katehi has demonstrated herself inadequate to any conception of a Chancellor’s task, and should confront the consequences of her catastrophically misguided actions,” Professor Clover asserts. Richardson says however that this won’t change anything because the Chancellor is merely a cog in the greater machinery of the system. “Rather than abandon the system,” she says, “I think we should try to change it.” Fellow protestor, Lee disagrees, saying “Of course Chancellor Katehi should resign. She should also face criminal charges.”

The unmistakeable odor of marijuana was abundant on the quad and the presence of people who were obviously not students both highlight the now controversial topic of safety. The protests and strike may be non-violent, but does that automatically make them safe? The vast majority of the protestors feel that all UC Police Departments should be dismantled. In fact, included in the General Strike was a talk given by a group of UC Davis professors entitled “Cops Off Campus: Toward a Safer University.” While some protestors see this as the only acceptable option, non-protestors are anything but quick to agree.

It appears that the presence of Occupy UC Davis is not going to go away anytime soon. But with winter break right around the corner, the movement may not be given the recent, overwhelming attention it has become accustomed to. If the protestors will remain through the break is yet to be determined.