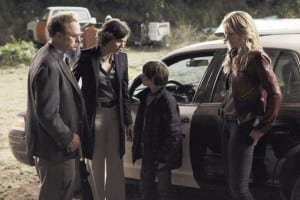 As Sheriff Graham deputizes Emma, the ground shakes and a giant sinkhole mysteriously appears at the edge of town. But a curious Henry's life is placed in danger when he decides to explore the innards of the sinkhole to see if its contents can link the inhabitants of Storybrooke to the fairytale world. Meanwhile, back in the fairytale world, Jiminy Cricket yearns to leave the family business and transform into the person he wants to be, on "Once Upon a Time," (ABC)

Allow me to introduce myself…MY NAME IS HOV! And if you do not get that joke we cannot be friends.

My name is Chris Peck, and I will be handling weekly reviews of ABC’s breakout hit, “Once Upon A Time.” These reviews will be primarily for people who have viewed the episode in question and will be sprinkled with spoilers for those who haven’t. Unfortunately, since I am starting this coverage mid-season I will begin with tonight’s episode, the fifth so far. I don’t wish to go over the plot developments of the first four episodes in excruciating detail, but for those who are intrigued, or as a refresher for regular watchers I will provide the SparkNotes version.

The premise of “OUAT” (my cool guy abbreviation for the show) is that “all the fairy-tale characters we know,” are trapped in quaint, real-world Storybrooke, (no, seriously) Maine. A powerful curse, enacted by the Evil Queen, has imprisoned them there for 28 years. Up until now, the townsfolk have been unaware that they once led grand lives as classic fairy-tale characters (or, you know, maybe they were just townsfolk there too). The only person who seems to have a clue, is a boy with a book (how he came to possess this book with all the answers is still a mystery), Henry, the adopted son of Regina, the mayor of Storybrooke and (drumroll) the Evil Queen of Fairy-Tale Land (played by Lana Parrilla)! Also important to note, Henry’s bio-mom, Emma, a.k.a the legendary offspring of Snow White and Prince Charming has been whisked to Storybrooke by her prodigal son, and has become a permanent resident in order to get closer to him.

Okay, so sorry about the very quick summation of the premise. It is missing a lot of important details, but my hope is you catch up and can keep in sync with these reviews. If you want a more detailed synopsis of the pilot’s (and more) events check out Wikipedia. Back to tonight’s episode! (Chessy Adam West era-Batman cut)

Tonight’s episode was pretty okay. The biggest flaws the show has been struggling with since the horse left the gate were largely unproblematic, mostly because our flashback was a dark, morality tale like last week’s “The Price of Gold.” In both, Rumpelstiltskin clearly warns the familiar fairy-tale faces that when they dabble in magic, they are taking risks. However, they all-too-eagerly dive in head-first into the perilous seas of “I told you so.”

This week, Jiminy Cricket (played by Raphael Sbarge) is the subject of this week’s flashback spotlight. If you are unfamiliar with this technique, “OUAT” was created by Adam Horowitz and Edward Kitsis, writers from a modestly watched show called “LOST.” That show pioneered the use of parallel flashback stories enlightening the present-day plot developments. Kitsis/Horowitz decided to employ the same technique here since they are dealing with two alternate worlds and a large ensemble. In the first two episodes I would say they largely failed to justify these flashbacks. Though the fairy-tale world is ripe with adventure and stories to tell, they were mostly used to establish what we already knew and did nothing but bog down the real-world happenings with shoved-in-my-face themes that paralleled the fairy-tale storyline. Though we still got some of these obvious winky-winks in tonight’s dialogue, they were much less noticeable.

Dr. Archie Hopper (yeah, one of those winky-winks) is the Storybrooke incarnation of Jiminy Cricket, and Henry’s psychiatrist. Early on, Henry’s Evil Queen mom, threatens to fire Archie if he doesn’t stop feeding into his delusions about fairy tales. Though in his clinical opinion it would be damaging to his psyche, he timidly obeys. During the next therapy session with Henry, he basically call the kid psychotic, to which the kid storms out, crying.

In his flashback he is beholden to his con-artist parents, whom he is seen pickpocketing for, though he clearly has moral objections to this sort of living. He stays with them even as an adult due to misplaced loyalty. This is never made entirely clear, why he feels so obligated to these awful people. We are expected to buy that his motives are familial guilt, though he clearly wants out. I largely let this go, as the parents themselves were a hoot as far as thieves go, but there seems to be no tangible roadblock for Jiminy despite wanting to be a good son over a good man.

One day, a boy gives him an umbrella as he unloads his parent’s wagon full of loot for their show (presumably another con) and he seems to reconsider his life due to the boy’s kindness. Then when he is sent to make an exchange with the sketchiest dealmaker around—Rumpelstiltskin (played with arresting chill by Robert Carlyle)—he decides to buy a magical potion to kill his parents with. All Rumpy wants in return is their bodies. Creepy…creepy awesome!

Jiminy plans to do the deed as he helps his parents on one last con. They ask an unassuming couple in the woods for shelter, and they proceed to sell them on an elf tonic, the only remedy that will save them from the plague. “Not THE plague, but a plague.” Once they exchange the elf tonic for some of their valuables, they run off. In a moment of ethical fury Jiminy tosses the potion on them like holy water, and nothing happens. The vile contains water. Then in a moment of traumatic realization he puts it together. His parents had switched the viles! He storms back into the cottage to find the couple has been transformed into shrunken dolls! Then Raggedy Ann and Andy’s kid comes home! Wow, guilt trip much?

Fortunately, the futility to escape an immoral life is not so in Storybrooke. Archie follows Henry into an abandoned mine in order to absolve himself from when he told his patient he was crazy earlier in the episode by saving him from being crushed by rocks. The kid is convinced the mine might be some sort of portal into the fairy-tale world. This is clumsily implied when there is movement beneath the mine after Emma (played with a welcome, dry wit by Jennifer Morrison) clips her new deputy’s badge to her belt. We get our oft anticipated “Duh, Henry” moment when he says, “Did you make any changes today? Did you do anything different?” Obviously, the fact that Emma has a job means she is sticking around, and this important. Thanks, little guy!

Whilst they Archie and Henry are stuck in the mine there is the usual chest-thumping over who is Henry’s “real mom” between Regina and Emma. Inside, there is some pleasantly honest dialogue. Henry stops being the fairy-tale equivalent of a Bible thumper long enough to admit that the reason he believes is mostly because, “There has to be more than this.” This is a common theme amongst the downtrodden in fairy tales, but it feels genuine in our own disappointing reality where cynicism is accepted and optimism is questioned. Archie also admits to feeling like he couldn’t be Jiminy Cricket, as Henry suspects, because he doesn’t always do what is right. When Henry assures him it took Jiminy Cricket awhile to find his right path, he believes that maybe it isn’t too late for him.

After an extremely miscalculated endeavor with explosives (why would blowing up the rock formations be a GOOD idea?) Emma is lowered into the mine (after a brilliant dalmatian sniffs out their location…yeah, really contrived), and for a moment we are lead to believe that Archie Hopper might be the first true death on the show as he hoists the kid up first, but as the elevator they were sitting in (another brilliant idea) caves, his umbrella, ah the trusty umbrella, hooks on to an apparatus and he is saved by his lucky charm. Once above ground, Archie has the guts to stand up to Regina and not so subtly reminds her that she may need him in a custody battle to testify on Henry’s behalf. Therefore, she will let him practice as he pleases. I guess blackmail CAN be considered of sound conscience. Wait, what?

We get a quick transition back to fairy-tale land where in the first true Pinocchio nod, Jiminy wishes upon a star. The Blue Fairy answers his plea and grants him his wish to be a cricket. He loves how they sound, and thinks they are the epitome of free, whatever. The Blue Fairy alerts him of his one condition: he must take care of a.k.a be the conscience for the newly orphaned boy. His name…GEPPETTO! Man, you should have seen that coming…but if you didn’t it’s cool, because the reveal could definitely sneak up on you if you weren’t waiting for it.

The other development is largely unimportant, though well received if only for the appearance of the naturally adorable Ginnifer Goodwin, who plays Mary Margaret Blanchard, Henry’s teacher and Snow White! Her storyline focuses on how the freshly awake from a coma and former Prince Charming feels so right with her. These scenes were the most cringe-inducing in their complete lack of subtlety to relate the two worlds. We know they will end up together despite his marriage to a suspect, and yet nauseatingly nice Kate Nolan, so lines like “You are the one thing that feels real,” would feel a lot more tender if he hadn’t just woke up yesterday. Yes, Goodwin’s undeniable cuteness makes me root for these two lovebirds, but any chemistry is one sided as Josh Dallas’ Charming still feels stale and one note, convincing as a looker, but not quite a charmer. But honestly, we get it, they’re soulmates. You can chill with the true love stuff. I mean, God, life isn’t a fairy—OHHHHH.

Clearly, in a fantasy meets real world drama there will be logical issues, so these will be forgiven to a a degree. But the mine shaft itself felt like a TOTAL curveball, and the episode’s final image, a peeved Regina tossing a stray piece of glass into the mine which at the bottom has many broken pieces of glass, seemed way too forced. Yes, the kid alluded to its existence as a portal, but I was lost as to what this meant at all. The online chatter suggests it could be the evil queen’s mirror, or Snow White’s glass coffin (from her fake death). The myriad choices are not from clever design, but from a lack of context. This kind of trickery for its own sake should not be tolerated, and as writers of “LOST,” Horowitz and Kitsis should know better. As mentioned the flashback stepped up as a clever twist on an old classic with a dark morality play to underscore and even contrast, and not completely overwhelm and exaggerate, the present-day plot. I worry a bit that Rumpelstiltskin may be over-utilized right now, because Carlyle and the character have the most gripping screen presence, but as long as the twist every week isn’t “Rumpy makes it gritty because he makes things turn out not as they’d planned” I’m going to remain optimistic that they have figured this flashback thing out for the time being. Ginnifer could have been used for better purpose, Morrison could have been used more humorously, and Evil Queen/Henry could have been—there a helluva a lot less. But for a refreshing Jiminy Cricket spotlight OUAT earns a B-.