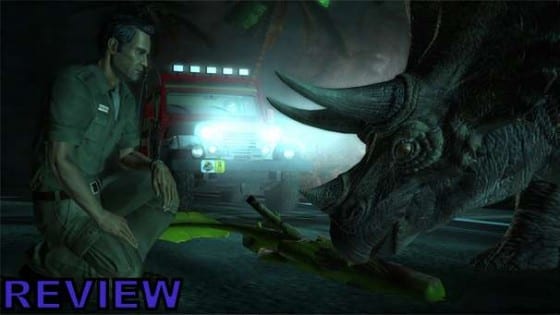 If you were to ask me earlier this year who  the most dependable independent studio in gaming was, I’d be hard-pressed not to answer with

Telltale Games. The San Rafael, Calif. based developer, famous for episodic titles like Sam and Max, Puzzle Agent and the revival of the Monkey Island franchise constantly releases quality puzzle and action games, with a distinct old school flair and top notch production values.  With their new game though – the gaming adaptation of the classic Steven Spielberg film Jurassic park, the studio is looking to blend new school mechanics with their tried and true formula.

It didn’t work.  Jurassic Park: The Game removes nearly everything from the Telltale formula that made it so endearing in the first place. Gone are the puzzles that require you to think, absent are the high quality production values that give the game that certain something – hell, it’s not even really a game as much as an interactive movie. I get it, the idea is to constantly bring new ideas to your studio’s games, but not at the expense of what made it so popular in the first place.

Jurassic Park: the Game picks up at one of the original movie’s few unanswered questions. About halfway through the movie, Nedry takes a barbasol can full of dino embryos to meet someone looking to pay high money for them, but of course he’s met with a face full of acid and the package never arrives. The game attempts to answer the question of just what happened to the employee (revealed here to be a female mercenary) sent in to retrieve the embryos. Along the way you’ll meet a dinosaur doctor and his daughter who are also stuck on the island, and it’s there that Jurassic Park: The Game begins proper.  It’s an interesting way to approach a story that pretty much everyone knows, and a can be a lot of fun for diehard fans of the franchise.

Jurassic Park isn’t as much of a game as it is an interactive movie experience.  The majority of the game follows a simple formula  — navigate the island through a series of quicktime events and point and click style sections.  Yep, it’s pretty much as boring as it sounds.  Let me walk you through a section, and this could really be any section – walk around, click on everything the game lets you and then move on. Yes, it’s that easy and more often than not there’s no real criteria for in what way you click them or in what order. It’s a far cry from the Telltale Games puzzles of the past, and in a way it’s sort of insulting.  Every now and then you’ll run into some dinosaurs (or perhaps more effectively they’ll run at you) and this is where the game should get interesting, but instead it gets even more disappointing.

So there you are, minding your own business and then BAM! A T-Rex comes out of the bushes and begins to chase you. At this point, you’d think the game would get interesting, but each of the game’s action sequences is presented via a quicktime event so you’ll simply follow the button prompts on the screen and poof – you’re done with the dino nightmare at hand. Normally I’m not as opposed to quicktime events as I was with Jurassic Park, but here if felt like a cop out, like an easy way to deal with having to take on such a menacing enemy. During the game’s development, Telltale was very vocal about how Quantic Dream’s PS3 exclusive Heavy Rain inspired a good portion of Jurassic Park’s gameplay and it shows, they just seemingly didn’t get inspired by the game’s story.

Throughout the game I had literally no attachment to any of the game’s characters, environments or actions, in fact – there were points I wished they would up end of at the wrong end of a Raptor’s claws. Each of the characters; the know-it-all doctor, the innocent little girl and tough talking mercenary chick, all feel like one dimensional stereotypes that seem to have taken all of five minutes to create. The game also seems to have an issue with switching between these characters as it’s never quite easy to be sure who you’re controlling and why. Most Telltale games make you control one character at a time – a formula the developer should have stuck with.

Jurassic Park: The Game is also missing the high quality production value that has given past Telltale Games titles such an identity. The characters models are decent enough, but the rest of the game looks and feels awkward. Characters move very stiffly, and the animation feels less than  second rate and the environments are all drab and lacking in detail. Perhaps most disappointing is just how forgettable the game’s music really is. Aside from the franchise’s trademark theme, the music is all forgettable, and even the dinosaur’s roars all seem unimpressive.

Blast Factor: With all of its classic source material, Telltale had a great game on its hands with Jurassic Park, but sadly the finished product didn’t even come near that potential.  Less of a game than an interactive movie, Jurassic Park is a dated, boring and somewhat insulting way to exploit a classic film. Congratulations Telltale, you’ve found a way to make a T-Rex boring.