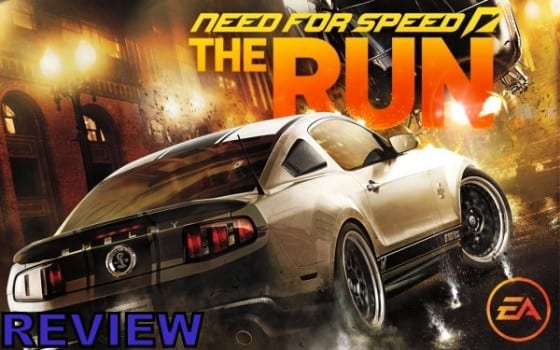 Most racing games flaunt their cars. They flaunt the insane amount of rides, how realistic they are and what it feels like to drive them. Need

For Speed: The Run is different though. The cars seem like an afterthought in favor of…the ability to get out of the car.

Yeah, you can see where this is going.

In a year with two quality Need For Speed games and a slew of other high quality racing titles, Need For Speed: The Run feels like a step back, a fraud almost. The actual racing mechanics themselves feel lackluster when compared to similar games and even the Hollywood blockbuster style storyline feels boring and uninspired. The Run could have been a quality action romp, but instead it’s one of the most disappointing games of the year.

From the get-go, The Run could have been great. The game, which finds you as a contestant in a cross country race from San Francisco to New York, is basically a rehash of the 1981 Bruce Willis movie  Cannonball  Run. In truth, there’s nothing wrong with that – the game takes you on some pretty cool trips, from the hills of San Francisco to the fields of Middle America, the tunnels of Chicago and finally the bustling streets of New York City.  The game recreates these locales in pretty impressive styles and most looks just as you’d expect it to.

To the developers credit, they manage to get some pretty varied (well, at least early in the game) missions into these locales. In some stages you’ll be pitted against a clock because you’ll need to make up time against other racers, and others you’ll have to avoid cops and gangsters in Hollywood style action sequences.  They’re really well done, but odds are you won’t notice; these sequences are presented as QuickTime events, so you’ll be more focused on pounding on the button that appears in the corner of the screen to fully enjoy what the developers have done here.

It’s a shame then that this Hollywood style treatment isn’t found throughout the entire game; namely the plot…or lack thereof.  Everything in Need For Speed: The Run feels incredibly scripted and as a result, less than thrilling. There’s no room for error in this incredibly linear tale as you’ll always need to complete each of the game’s objectives in the right order to move on or your trying again. Cops and other NPCs all behave and speak the same way, and in some sections it doesn’t matter what you do, the game shoehorns you into quicktime event action sequences.

The most disappointing aspect of The Run is just how few of options there truly are. You can’t fine tune your car or buy new parts for it; hell – customization is completely gone here. You’ll pick up new cars along the road and in gas stations, but if you don’t like them, your only option is to wait until you find a new one. This takes a lot of the replay value out of the game when compared to other Need For Speed games, and is especially apparent in the online mode. No longer are you racing against player’s own creations, you’re just racing against pre-made cars with attributes set by the computer. Where’s the fun in that?

Of course, this would all be forgivable if The Run was a great driving game, but it’s not…it’s not even a decent one. Gone are the fine tuned machines and mechanics from previous games in favor of arcade style controls that feel tacked on. Cars often feel floaty as if they don’t have any weight to them and handling can be incredibly frustrating.  It’s often that you’ll be chased by a group of pursuers, making good time, but be screwed over by one curve and have to start the whole race over again.

The Blast Factor: Need For Speed: Shift and Hot Pursuit served as rebirths for a racing franchise that had gone stale. They introduced new mechanics and were a blast to play through. In that sense The Run can only be seen as a major step back. It’s built on shoddy mechanics, goofy premises and a horribly bland story. There are plenty of great racing games on the market and this is not one of them.