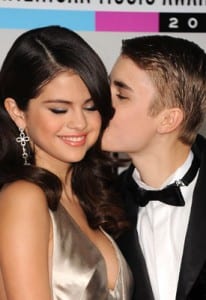 Despite his recent Daddy drama, Justin Bieber is a respectful boyfriend.  During a recent interview on Power 105.1, the pop star explained the dinner he planned for girlfriend Selena Gomez in the middle of the Staples Center in Los Angeles.

“It was my idea,” Bieber said, according to the New York Post. “She was talking about wanting to see ‘Titanic’ again because she hadn’t seen it since she was a little girl.  We were fighting a little bit, so I just really wanted to take her somewhere special.  We had dinner in the middle of the Staples Center.”

Although the DJs poke fun at him, Bieber said. “You got to treat a woman right.  Girls like when you just do spontaneous things.”

The young star also defended his reasoning for not jumping on sexy stars like Kim Kardashian.

“Why would I let something so amazing slip away?” he said to the DJs.

What he lacks in years, Bieber has in swag.