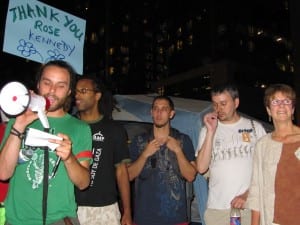 Up to now, there has been a good relationship between Occupy Boston and the Rose Fitzgerald Kennedy Greenway Conservancy, the non-profit organization that stewards the publicly-owned Dewey Square Park.

Although crowded and desirous of more space, the occupiers have stayed off the strip of land along the gravel path since the Conservancy indicated the plants there are delicate and could easily be damaged. And when Nancy Brennan, Executive Director of the Rose Fitzgerald Kennedy Greenway Conservancy, appeared at the occupiers’ General Assembly a few hours before 141 arrests were made on October 11, her address ended with the words “…another thing that the Greenway stands for is freedom of speech and I ask, for as long as you are on this land, would you please help us take care of it?” Her smile beamed as the crowd chanted her name in appreciation.

Last week, however, the Conservancy sent Mayor Thomas M. Menino a letter saying, in part, “we respectfully request that the City of Boston act to enforce our regulations and City permitting regulations.” The letter cites noise, sanitary conditions and crime among the reasons to evict the tent city.

On Tuesday, a day after the New York Police Department leveled the Occupy Wall Street encampment at Zuccotti Park, plaintiffs representing Occupy Boston showed up at Suffolk Superior Court where Judge Frances McIntyre granted a temporarily injunction preventing police from raiding Dewey Square Park and removing the occupiers. The order, however, does allow police to act in case of fire, health issues, and violent outbreaks. McIntyre also ordered occupiers meet with city officials for a mediation session, and there is a hearing on a preliminary injunction scheduled for December 1.

According to text on the Occupy Boston website: “Some are saying that no police crackdown is immanent because the letter is over a week old and was written before a Boston judge recently granted an injunction barring the city and police from removing the occupiers. Others are arguing that injunctions will not prevent a crackdown because mayor Bloomberg disregarded a similar injunction to remove the occupiers from Liberty Plaza in NYC, and then got a judge to over-rule an injunction that was to pave the way for the protestors return to the plaza.”

Click here for a transcription of the letter sent to Menino by the Greenway Conservancy.