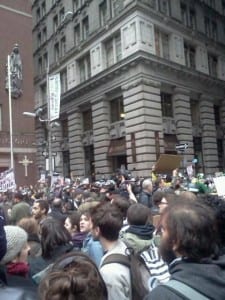 New York — A genuine attempt at shutting down New York City was only a threat until earlier today.

Occupiers arose this morning determined to make the two month anniversary since the protests started a “historic moment” for all. Hundreds of people took on to the streets and attempted to shut down the New York Stock Exchange and major banks. However, this goal was not reached; the Stock Exchange opened on time as individuals who showed proper identification to law enforcement were allowed to pass through barricades. Police arrested about 200 of the protesters who were responsible for obstructing traffic and resisting the arrests. ABC news stated that these demonstrations are just a “big test of strength,” and pronounced today’s events to be “their biggest yet.”

Thousands of protesters were at the scene chanting, “Shut the whole country down,” and “All day, all week, shut down Wall Street!”

According to BBC news the protesters fanned out on trains throughout the five boroughs at around 5:00 pm, continuing their day of disruption with a rally at Foley Square. Cath Turner of Al-Jazeera English estimated that the crowd swelled to around 10,000 people. Traffic in the area was at a standstill and police have set up barricades and closed some of the sidewalks.

At around 6:00 pm protesters left their post and prepared to march across the Brooklyn Bridge. According to the Wall Street Journal, dozens of the marchers were arrested when a small group veered away from the rest and commenced walking into lanes of traffic on the bridge. The rest of the large group, who did not walk onto the bridge roadway, were allowed to continue without incident.

The organizers of the Occupy Wall Street movement are thought to be planning a large meeting at Zuccotti Park, the base of the movement, later this evening.