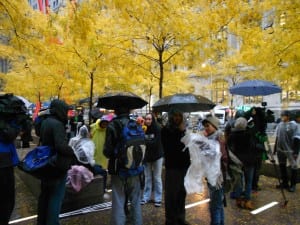 NEW YORK — Many would think that Tuesday’s eviction from Zuccotti Park would act as a deterrent for protesters. However, the mood among occupiers in Wall Street, many of whom had been camping out since September 17 in protest of the sprouting gap between the wealthiest one-percent of the United States and the rest of the population, remains jubilant despite a judge’s ruling that the First Amendment did not provide demonstrators the right to continue residing in the 33,000-square-foot park.

Tuesday came and went and in a matter of hours Zuccotti Park went back to its original state. What was once home to the Occupy Wall Street movement against economic inequality the park returned to simply being an unoccupied public space after Judge Michael Stallman ruled against the protesters and their limited right to free speech. He stated that “the First Amendment protects speech–it does not protect the use of tents and sleeping bags for an indefinite time.” Demonstrators were forced to evacuate immediately. The park, according to Bloomberg, had become unsanitary and hazardous and it had begun affecting the businesses around it.

Efforts to clear out the area began at 1 a.m on Tuesday, when police officers handed out leaflets from the park’s owner saying they were required to “remove all property,” according to CNN correspondents. Reportedly 234 arrests were made.

Hundreds of people were consequently left without a place to sleep. Nearby churches, therefore, opened their doors to Wall Street Protesters for the night.

Dimitrius Wyming, who has been present since the start of the protests, said he believes the next step is to shut down New York City, beginning with the stock exchange, following with the subways (16 stations precisely), and the Brooklyn Bridge. “By ridding the park, he [Bloomberg] started trouble. We’re here all together. No matter what color. We’re still a family.” Peacefully, they will continue protesting for what they belief to be a righteous cause.  He’s thinking “Occupy Central Park,” next.

Protesters were allowed back into the park shortly before 6 p.m. Tuesday. Their belongings were not. From now on, they are banned from sleeping in the park, or lying down, as well as bringing any bulky item(s) with them.

Scott Gralnick, a 25 year-old CEO of his own company called Dating Outside of the Box, said that cleaning out the park has actually helped make the movement much more inviting for the out-of-towners. He claimed that as of now everyone has been dispersed, but starting tomorrow there will be a large presence again. According to Gralnick, protesters will work in three, eight-hour shifts allowing a continuous, 24-hour presence to proceed.

Timesunion.com released a statement expressed by one of the occupiers. “You can’t evict an idea,” and from what it seems, the protesters will not allow their eviction from Zuccotti Park to prevent them from achieving their goal. The crowd plans multiple protests to take place on Thursday, exactly two months after the Occupy movement began, with demonstrations on college campuses all over New York City.