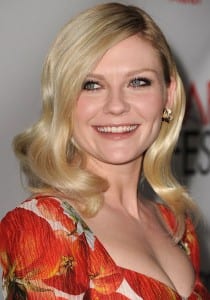 Kirsten Dunst, who appeared on The Ellen Show to publicize her new movie, “Melancholia“, revealed for the first time her struggles with depression.

Dunst, who has spent much of her 29 years of life acting, said on the show that her depression had much to do with being a figure in the media. She said “It’s also interesting as an actress you’re supposed to be sensitive and vulnerable and have this side to you. But then you’re supposed to be super sociable and ‘on’ and like nice to everybody. That’s a weird dichotomy. It’s a lot to ask of a person. It’s not a normal thing.” Because of the affect that constantly being in the public eye has on her, Dunst said she avoids events as much as possible. “I avoid the red carpet as much as possible. You have to do it to promote your movies obviously, but you won’t see me at an event just for the sake of it.”

The actress retreated to the Cirque Lodge Treatment Center in Utah in 2008 to refresh her ideals. She said “I definitely took a little bit of a break. And also, when you’re in your 20s you need figure things out and take a step back. I had been acting so long, all my life. I think I just needed a little bit of some perspective. It was good for me and it re-inspired what I do, too.”