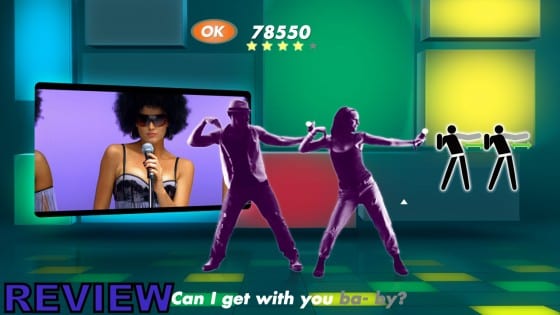 I’m what you call a wallflower. Born with two left feet, it’s a hazard to many when I’m dragged on to the dance floor. Let me let you in on a

little secret though; when the curtains are drawn, and mood is right — I’ve been known to cut a mean rug in front of games like Dance Central with the family. You’ll probably never see it, but it’s quite the strange site to see a grown 240 lb man shaking it to Poker Face. Dance Central and its sequel are easily the standard in the newly forming dancing genre, but Sony’s new entry Everybody Dance is a more than capable challenger to the throne. With a slick presentation and a few new bells and whistles, it could be the most surprisingly fun guilty pleasure you’ll have this year — be warned though, the more you play, the more you’ll start to pick apart its flaws.

By now you know Everybody Dance’s deal, hold the PlayStation Move controller, and shake it to a bunch of awesome music while diagrams on the screen show you what your next move will be. It’s a simple formula, but Everybody Dance may have found an incredibly simple way to improve upon it. The upper left hand corner of the screen features the song’s music video, and while it may sound distracting for the dance steps, it serves quite a useful purpose. Odds are that the majority of the people playing games like this and Dance Central aren’t the best dancers, but are looking to have a fun time. Adding in the music video seems to make those apprehensive to join in the fun a bit more since not everyone’s attention is focused directly on them. In general though, the presentation in Everybody Dance is top notch. The on-screen display is crisp and unlike games like Just Dance, they’re quite easy to follow.

Of course, any dancing game is built on just how good its track listing is, and Everybody Dance delivers here too. While other games in the genre clearly focus on one genre while throwing occasional love to others, Everybody Dance’s track list is an eclectic one to say the least. At one point you’re jamming to Rihanna, then the next you’re getting nostalgic with New Kids on the Block or even a bit romantic with Barry White.  Personally, I really enjoyed my time with Elton John’s “I’m still standing” and The Chemical Brothers, “Hey Boy, Hey Girl.”

In Everybody Dance, you can dance alone, compete against a friend or alongside them in co-op, but where the game really takes off is with its dance creator mode. Here, you can skip the game’s choreography for the game and record your own, then challenge others to dance it. This is extremely fun and novel in a number of different ways — first, people like me can record the strangest dances in the world and laugh as friends try to copy them, but it’s also great for those who can actually dance and want to show the world their choreography skills. If Everybody Dance has legs, it’ll be here.

Really, the only thing that bugged me with Everybody Dance isn’t an issue with the game itself, but the platform it’s on and its limitations. The PlayStation Move requires the controller and the Eye camera, so it begs the question — if I’m doing all of this work, trying to match up with the choreography perfectly, is it just monitoring the controller itself? Could I get by with just moving the controller somewhat similarly to the way the dancers are? Yes…and no. Most songs don’t allow you to cheat, but there were a few times when it felt like I was just able to take the easy way out. Take for instance a few cases where I was given good scores after I know I screwed up the majority of my body.

The Blast Factor: Everybody Dance is the perfect game to bring out at parties. Everyone is bound to have a good time since they’re not paying that close attention to the game’s mechanics. It’s bright, loud and so incredibly fun that even wallflowers like me are going to find it hard to resist. It may not be perfect, but Everybody Dance could be one of the biggest surprises of this holiday season.