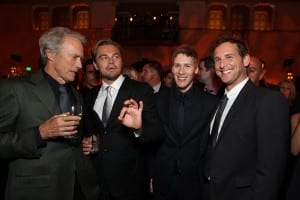 The new Clint Eastwood-directed film, “J. Edgar,” tackles the life of J. Edgar Hoover, the first director of the Federal Bureau of Investigations, especially the relationship between him and the associate director of the FBI, Clyde Tolson.

Leonardo DiCaprio plays Hoover, and Armie Hammer takes on the role of Tolson.

Dustin Lance Black, the screenwriter of the film, explained the direction he took with the story in an interview with AfterElton.com. Concerning the reaction of the time to Hoover’s sexuality, he said “There was no word ‘gay.’ Gay didn’t mean what it means today. Gay meant you were having a good time. Homosexual wouldn’t be used until later when it was used to define a disease” and that “It was a love that dared not speak”.

In the doc-film, Black tried to keep the plot as grounded as possible. He said “I try my best to always root things in truth so it’s something that it’s anchored in. I don’t want to just completely make something up out of whole cloth especially if it’s a pivotal moment… To me, there needs to be an anchor and then you have to have done your work not only researching the person and everything you can find out about them and do the hard work, too, but also research the time and know the rules of the time”.

“J. Edgar” will be released nationwide on November 11.