At approximately 5:55 p.m. yesterday, Sean Cormier, 21, of Westport, Kiean Lyons, 17, of Norwood, and Jeffrey Nunes, 17 of Westport, were arrested outside the Burger King at 553 Boylston Street across from Trinity Church in Copley Plaza.

A police spokesperson told the Boston Globe the three were masked when “they burst through the front door and ran through the main dining room, which was at capacity…(customers) cowered in fear, with a look of shock and disbelief on their faces.” The three are charged with disorderly conduct and disturbing the peace.

Minutes earlier, the trio broke from away from an Occupy Boston protest march heading west on Newbury Street and, carrying large banners with them, cut over to Boylston Street. Two Boston Police officers mounted on bicycles gave pursuit. 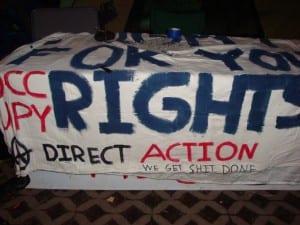 This freshly-painted banner, shown here the night before the arrests, was carried by one of the protestors. (Blast Staff photo/John Stephen Dwyer)

An anonymous source at the Occupy Boston encampment later indicated the three were headed to Prudential Center to hang their banners before the arrival of the 100+ person march but may have chosen to run inside Burger King when police blocked their way. The same source said the protest march did make it to Prudential Center and demonstrated there (similar to as they have done at Fanueil Hall and Quincy Market Several times in the past) until a complaint to the Boston Police from a store manager led to the demonstrators’ departure.

When Blast caught up with the three protestors who had separated from the march, they were being detained on the sidewalk outside Burger King by approximately 10 uniformed police officers and several in plain clothes. Overhearing a policeman describe sticks the trio was carrying, Jeffrey Nunes (the most outspoken of the three) responded “are you kidding me.? It’s tied to a banner” before adding sarcastically, “those are definitely weapons.” He added, “You got to be fucking kidding me. This is what a police state looks like. This is what happens when police have nothing better to do.”

When a bystander asked him what happened, Nunes said “they think we’re about to commit a robbery or some other bullshit. We were just at a march.”

Minutes later, the three detainees began chanting “Show me what a police state looks like? This is what a police state looks like!” using the call-and-response pattern popular with Occupy protests nationwide. A man in a backwards baseball cap began heckling them asking, “Don’t you sound a little rehearsed?” causing Nunes to respond “What does that matter?” before starting the chant “from Boston to Greece, fuck the police” which the others joined. While “fuck the police,” “I smell bacon” and other phrases taunting police officers are vastly unpopular among Occupy Boston protestors, that community did (during its first week of occupation) decide through consensus to respect “diversity of tactics” as expressed through “autonomous actions.”

The heckler, later characterized by someone in the crowd as “that drunk guy,” continued making comments even after a policeman addressed him saying “Chill out…I don’t need you to get that fired up, alright?’ The protestors’ chant stopped when police turned Lyons to face the building and handcuffed him behind his back. Lyons asked several times, “what am I being arrested for?” before yelling “I was walking down the street; this is why I’m being arrested! My name is Kiean Lyons…I’m an American patriot. I’m being arrested for walking down the street and defending my rights!” He was then put inside a police car.

The vociferous bystander continued yelling at the two remaining detainees saying “You’re being arrested for disorderly (sic).” Nunes, wearing a keffiyeh (a traditional Arab headdress) loosely around his neck responded, “No, we’re being arrested for dressing in a Arabian scarf and walking down the street, or running down the street. We’re apparently about to commit a robbery…” As police handcuffed Cormier he repeatedly asked “how am I disturbing the peace?

The heckler continued his taunts saying “you can get arrested for disorderly…you’re just shooting your mouth off, you can get arrested for that…yeah you can!” Nunes retorted “that’s what this country was built on: freedom of speech.” In the final seconds before Nunes was put inside a police car, the heckler asked him “so what do you have to say?” Nunes responded, “What do I have to say? This is what a police state looks like.”

Earlier this same day, during a separate Occupy Boston march around 1:30 p.m., Langston Peace, 29 of Boston, was arrested and charged with larceny over $250 during for allegedly walking off with a police officer’s departmental bicycle. It’s unclear whether this incident was an act of protest connected with Occupy Boston. If so, the arrest of Peace and the three men at Burger King brings the total number arrests since September 30 of Occupy Boston protestors to 170 (with some demonstrators — such as Nunes and Cornier who were arrested along with 141 others on October 11 — being arrested more than once during this time).