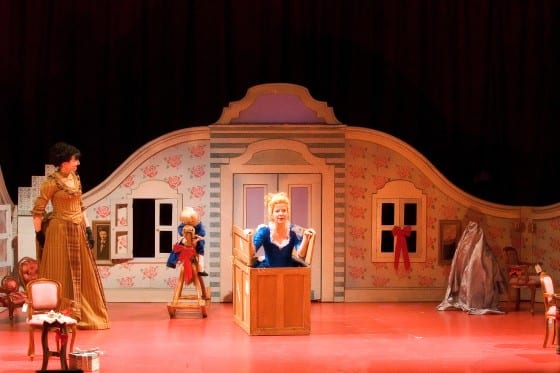 You’ve got your graphic sex, your stilt-walking and puppetry, your opera, your naked dwarves, your postmodern meta-narratives, you know—an Ibsen play.

Actually, “Mabou Mines Dollhouse” would probably be Ibsen’s worst nightmare. It certainly uses the look and feel of a nightmare to explode this foundational work of modern drama into flaming pieces of satirical mercury. The bizarre and unforgettable production seems to want to emphasize the play’s moralistic message about gender roles and sublimation by exaggerating its central metaphor to the zillionth degree, while at the same time mocking the work’s sincere tone and the conventions of sentimental realism.

In the climax of Ibsen’s play—a real shocker for 1879 which is credited with changing the face of Modern drama—Nora, the iconic heroine (for whom Central Square’s Nora Theatre Company is named), comes to realize that she’s been hiding her competence and power to conform to societal norms. She’s taken out a desperately needed loan by forging her father’s signature, earned and spirited away some money toward paying it off and quashed a plot to expose her crime, all behind the back of her prideful husband. Now’s she’s tired of being patted on the head by him.

“When I was at home with papa, he told me his opinion about everything, and so I had the same opinions; and if I differed from him I concealed the fact, because he would not have liked it. He called me his doll-child, and he played with me just as I used to play with my dolls. And when I came to live with you—

I mean that I was simply transferred from papa’s hands into yours. You arranged everything according to your own taste, and so I got the same tastes as you–or else I pretended to, I am really not quite sure which…I have existed merely to perform tricks for you, Torvald. But you would have it so. You and papa have committed a great sin against me. It is your fault that I have made nothing of my life.”

Director Lee Breuer’s conception is to stage the entire play as an extended version of this analogy. His crew erects a flimsy approximation of a literal dollhouse on stage. His Nora, played by Maude Mitchell, acts like a hyperactive child at a tea party (although when she does drink “tea” its actually vodka).

Her husband Torvald (Kristopher Medina) and his male compatriots, Nora’s secret admirer, Dr. Rank (Joey Gnoffo) and the thwarted banker, Krogstadt (Nic Novicki) are played by little people. Presumably this is because they are doll-like in appearance, or perhaps, more troublingly, they are meant to represent the spiritual smallness or powerlessness of the men in Nora’s life.

While Ibsen’s text and story are largely preserved, the play is enacted in the language of dreams. Sexual innuendos are played out explicitly. A threat of death  hangs over the play, Nora’s friend Kristine (Janet Girardeau) is recently widowed, Dr. Rank is deathly ill and Nora and Krogstadt discuss suicide, and so there are visits from grim reapers and death’s heads. Associative and symbolic imagery abounds and sometimes characters fall asleep and hear key speeches delivered in their minds.

If you’ve seen “A Doll’s House” performed numerous times, it’s extremely entertaining to watch it treated this way: utterly without subtlety, propriety or seriousness. But Breuer doesn’t stop there. He doesn’t allow you to simply get lost in his strange Ibsen-inspired dream. By constantly sending up lines, trashing the fourth wall and drawing attention to the artifice of his own spectacle, he seems to be saying, Here we all are in a giant dollhouse: still exploring our identities by playing childrens’ games.

It’s jarring, but ultimately in the right way. I was shocked, moved, tickled and puzzled by this production. I was never bored. “Mabou Mines Dollhouse” has been touring around the world for almost a decade. This weekend’s performances at the Emerson Majestic will be it’s last. I vividly remember reading about this “Dollhouse” with little people in the New Yorker when the tour began. At the time, I scoffed thinking  it sounded like the height of decadent “weirdness-for-the-sake-of-weirdness.” Now that I’ve finally seen it, I recognize a bizarre yet rich experiment. Purists will be horrified. Those unfamiliar with Ibsen may be perhaps less rewardingly confused. Students of theater however, will have their minds blown.