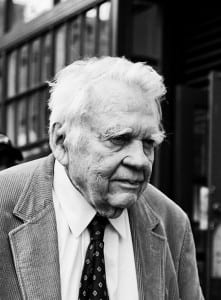 Andy Rooney, of the “60 Minutes” fame, died on Friday due to complications from a recent surgery.

Rooney was known for his desensitized commentaries on a broad array of topics, from the war in Iraq to types of milk. His 3-minute commentaries appeared on “60 minutes” from 1978 to 2011. His last appearance in the show was on October 2, in which he said “I’ve done a lot of complaining here, but of all the things I’ve complained about, I can’t complain about my life.” In total, he gave 1,097 commentaries on the show.

Rooney, born on January 14, 1919, attended Colgate University in Hamilton, New York before he was drafted into the U.S. Army for World War II. He was introduced into the world of writing in 1942, while still in the army, when he began writing for the publication “Stars and Stripes” in London. In his life, he wrote 16 books and many newspaper articles.

Leslie Moonves, president and CEO of CBS said about Rooney “His wry wit, his unique ability to capture the essence of any issue, and his larger-than-life personality made him an icon, not only within the industry but among readers and viewers around the globe. Andy was not just a member of the CBS family; he was a member of the world’s family. We treasure the legacy he has left, and his presence will be sorely missed by those of us at CBS and by his fans around the world.”