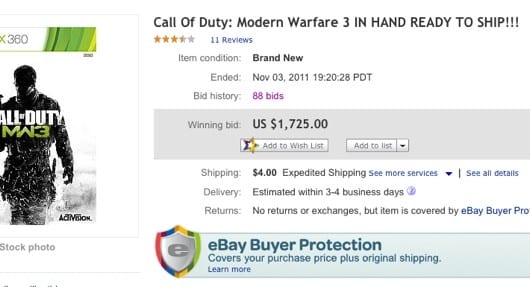 Okay, we get it, you’re excited for Call of Duty: Modern Warfare 3; but this is a little excessive. Someone on eBay just payed over a grand for an Xbox 360 copy of the game; $1,725 to be exact. Here’s the kicker, the game comes out in 4 days and the listings says that it should take 3-4 business days to arrive, meaning that whoever shelled out the cash should be getting it Monday morning. Maybe.

The copy is likely one of the many sold early at K-mart stores nationwide. It seems the boxes containing the much anticipated shooter were not marked with a street date, and were rushed to the sales floor. Don’t get any ideas, once the company found out (after selling more than a fair amount), K-mart pulled the copies off shelves until Tuesday morning.