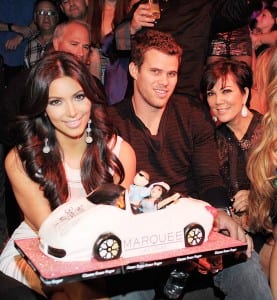 Kim and Kris on October 22 in Las Vegas (WireImage).

It was the shock heard ’round the world: Kim Kardashian files for divorce. Boom! Immediately after the news hit, the internet was aflutter with talk about what went wrong and the lessons we mere mortals could take away from their connubial downfall. I’m going to hop on that bandwagon and offer my perspective.

“The truth is rarely pure and never simple” – Oscar Wilde

Hollywood is full of deception. One such falsehood it perpetuates is the perfect, fairytale relationships of its celebrity inhabitants, the endless coverage of which is at once addictive and nauseating: Hollywood lovers on perfect dates, wearing perfect clothes, on perfect vacations, looking perfectly. They gush about each other in magazine interviews and mug happily for the paparazzi. What glamorous lives, what gorgeous couples – they must all be so perfectly happy! It isn’t long, though, before we’re shaken from our delusional daydreams by the words “irreconcilable differences.”

Hollywood’s not the only architect of artifice. The advent of social media gives us all the ability to create these illusions, in just a few clicks of a mouse no less. Facebook is one of the worst offenders, a veritable avatar for perfect lives and perfect weddings and perfect homes and perfect children who never cry and always look like little darlings. (I liken these saccharine displays of social chest-puffing to the Class Notes section of my alma mater’s alumni magazine, in which my classmates – who are either on the brink of curing cancer or on the path to becoming the next Supreme Court Justice or are popping out kids with wild abandon – have an uncanny ability to make me feel completely inadequate.)

And so it’s not just celebrity couples who we come to falsely envy for their supposed perfect, picturesque relationships. We do this with everyday couples all around us. We build them into things they’re not, and wonder if our own relationships measure up. The truth, though, is that we should never believe what we see – we’re not privy to what goes on behind closed doors in other people’s relationships. We don’t know if a couple has constructed a facade of sparkles and rainbows in order to hide the fact that they may in fact be struggling. I learned that valuable lesson a few years ago when, out at a bar, I saw a man I knew all over some woman, who just so happened wasn’t his wife. But what about the ad nauseum pronouncements of their perfect love; what about that fabulous vacation they just took, in which they looked so mind-numbingly happy? I had been so envious of what I thought they had when in reality it was an illusion.

It’s easy to be envious of others, to covet what they have – or what we think they may have. Quite often, though, those seemingly perfect couples have issues. Case in point: Kim Kardashian and Kris Humphries, or the couple on Facebook you’ve been admiring. Making comparisons to other couples is pointless and unproductive. And doing so doesn’t get us anywhere closer to being happy within our own relationships.

Focus on and treasure what you have with your partner; celebrate what’s great about your relationship.

I know what you’re going to say: You heard a story about your friend’s brother’s painter’s lawyer’s doctor’s proctologist’s veterinarian, who married her husband six months after meeting him. But here’s the deal: That’s not going to happen to you. OK, maybe it will. But the odds are against it and there are plenty of reasons, anyway, as to why you should wait. I have no doubt Kris Humphries and Kim Kardashian fell in love (and major lust!) with each other, but there was hardly any way for the two of them to know, after six months of dating, especially given their lifestyles, if it was the type of love that could last for the long haul. They barely knew each other. They had no history together to be able to say: “We know we can get through something difficult as a couple because we already went through x, y, and z together.” While I’d like to think just being in love can get you through the worst of times, realistically speaking, I think you need to experience a few downs with someone to know if that love has long-term potential.

Just recently, Kim Kardashian released a statement regarding the demise of her relationship: “I want a family and babies and a real life so badly that maybe I rushed into something too soon. I believed in love and the dream of what I wanted so badly. I felt like I was on a fast roller coaster and couldn’t get off when now I know I probably should have.” This appears to be a classic example of someone wanting something so desperately that they’re not even sure what they’re signing up for. They have the end goal in sight but aren’t thinking rationally about the present moment. Had she put the reins on the relationship a bit and experienced a longer courtship, perhaps she would have realized (before spending the GDP of a small, third world nation on her wedding) that Kris Humphries wasn’t the right person for her. Hindsight is always 20/20.

“Any girl can be glamorous. All you have to do is stand still and look stupid.” – Hedy Lamarr

Kim Kardashian may be one of the most preternaturally beautiful creatures in existence (that hair, those eyes, those cheekbones!), and Kris Humphries may be an Adonis in his own right, but as the erudite Yoda would say: “A happy relationship that does not make.” It can be hard not to be just a tad bit envious of someone so stunning; when you realize, though, how little beauty means in terms of personal contentment envy becomes a much easier pill to swallow.

The most beautiful people might even have it the toughest: Do their mates truly love them for who they are at their very core, or do they just want them for that shiny, delicious-looking exterior? I remember Kim Kardashian saying something early on in her infatuation with Kris Humphries, before even meeting him, about wanting to have his babies on account of his good looks. While that kind of a comment makes for a good tweet, it smacks of superficiality. Sure, it’s important to be attracted to your mate, but it’s equally as important to be reminded that a relationship based primarily on a person’s hotness quotient is a precarious tightrope to walk.

“While money can’t buy happiness, it certainly lets you choose your own form of misery.” – Groucho Marx

It’s also hard not to be envious of Kim Kardashian’s lifestyle, until we realize that it’s actually quite easy. With millions of dollars coming in and the glitz and glamor of a relationship between an NBA star and a not-sure-why-exactly-you’re-famous star, we were fooled (once again) into believing the fairytale. Then, divorce ensues, the veil of perfection is lifted, and we are reminded (once again) of the false promises of money. Sure, it may make life easier in certain ways, if we have a lot of it, but it can never fill emotional voids. Take the majority of Bravo’s Housewives: Despite gobs of money coming out their surgically enhanced wazoos, most of them seem pretty miserable.

“Observe all men; thy self most” – Benjamin Franklin

Let’s refer back to the aforementioned quote Kim Kardashian gave about her desire for babies and family, a sentiment I’ve heard her make countless times before. These declarations certainly make for good interview soundbites and TV footage, but unfortunately, her actions and choices in her love life don’t seem to ever match her words.

In my early to mid-twenties I was guilty of doing the same thing. I’d continually squawk about wanting to settle down and my desire for intimacy, yet the only type of men I went for either lived far away or were commitmentphobes. I’d complain and cry and stomp my feet, always blaming everyone else for my relationship woes, everyone but myself – it was easier to pass the buck than look inward at my own issues. In retrospect, I don’t think I was at all ready for real intimacy during this period of my life. There’s a great book I read during this tumultuous time, titled “He’s Scared; She’s Scared” by Steven Carter and Julia Sokol. One of the ideas they focused on was “passive avoidance,” the notion that people passively avoid commitment by pursuing unavailable mates. It was pretty incisive.

I have no idea what Kim’s issues really are; however, I do know that saying you want the trifecta – love, commitment, and family – doesn’t necessarily mean you’re ready for it or that it’s even deep down what you actually want or that you know how to get there. Take some time to figure yourself out; when you have a better understanding, you’ll be in a position to make better choices.

6. For the love of God, exercise some monetary discretion

“Spending 10 million dollars on your wedding is stupid.” – Neely Steinberg