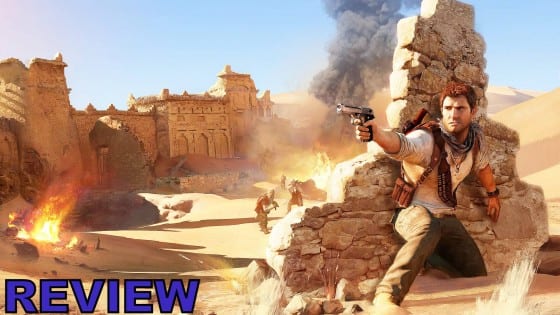 In the coming weeks and months, you’re bound to hear a lot about the big things that make Uncharted 3 so special. You’re going to hear

about the thrilling set pieces, the over the top action and the multiplayer. While these things are impressive and go a very long way in making the game what it is, they’re not what makes the game truly great. What separates Nathan Drake’s latest adventure from other action adventure games is the little touches. It’s in the way that Naughty Dog made the worlds and characters so believable, how through a combination of wonderful music, writing, pacing and gameplay, you’re going to care more about these characters than most.

Simply put, Uncharted 3 is one of the best games I’ve ever played.

Once again you’re dumped in to a globetrotting adventure with Nathan Drake, Sully and the rest of his pals. Trying not to give away much, you’re on a quest that deals with Drake’s ancestor; Sir Francis Drake. While this may seem like business as usual for the franchise, it’s truly anything but. For the first time in franchise history, things aren’t as black and white as “we’re going here to look for treasure,” sure those moments are here, but the story is built around developing the believable relationships between characters like Drake and Sully or even the game’s new villain Katherine Marlowe. Key here is that for the first time ever, we’re actually doubting Drake’s intentions, and each of the game’s characters instantly feels much more real, and watching that story play out is incredibly interesting.

Perhaps what makes the game so incredibly riveting to watch is just how well every part of the game works in unison. The story features absolutely brilliant pacing that rivals that of Hollywood movies, and the top notch voice acting combined with the stunning score and remarkable visuals makes for a great experience. With Uncharted 3, Naughty Dog has cemented their reputation as one of the best storytellers in not just the industry, but all of popular culture.  It’s seen in the relationship reveals, the stunning plot twists that make you rethink the entire strategy, and perhaps most importantly, the game’s feeling of resonance players are sure to have each time they step away.

Gameplay wise, Uncharted 3 takes a lot from its most recent predecessor, but here, things have been fine tuned. You’ll still jump from ledge to ledge, shimmy across pipes and escape from certain death at the last minute, but somehow – it still feels fresh and new. Perhaps it’s because the game at times challenges what you think you know from the series. Take one of the game’s early stages where I was trying to follow the game’s villain, Katherine Marlowe. To get a better vantage point, I jumped on to a pole protruding from the side of the building, but before I knew it, it snapped in half, sending me to my death. It’s moments like these that caused me to stop and rethink my choices for most of the game.

The majority of Uncharted 3’s campaign is centered around gigantic, over-the-top action movie style set pieces that even outdo those of the previous game. Whether it’s clinging for dear life to a chain on the outside of an old tower or escaping a burning chateau in France, Uncharted 3 is full of moments that are sure to keep you on the edge of your seat.  What makes these moments so memorable is just how human Drake feels during them. Now, I’ve heard a lot of complaints about how Drake feels less human this go-round, how he can seemingly survive anything, but do you really want the opposite? Do you want to have to start over after every gunshot, every grenade toss. Drake is remarkably human and relatable because after these events, he’s huffing and puffing, trying to catch his breath; amazed at what just happened.  He shows true emotion. He seems to be just as surprised at what just happened as I did. If you ask me, that’s much more human than most action games, which feature heroes who don’t even flinch in the face of danger.

I may be in the minority here, but I actually loved the melee combat in Uncharted 2, so I was a bit apprehensive when I learned they were changing it for the new game, but after only a few minutes, I found myself enjoying myself every bit as much as in the previous game. There’s now a dedicated reversal system, which goes a long way in helping change the rhythm of a fight, along with a context sensitive grab mechanic. Say you’re standing by a window, you can grab a guy and toss him out of it, or slide him down a bar you’re next to. If I had to compare it to another game, it would be that of the recently released Arkham City, which also had a stellar melee system.

Uncharted 3 is at its best when it’s doing two things, keeping me on the edge of my seat and making me care about what’s happening to its characters. The game succeeds most in both ways about midway through the game, when (hoping to avoid giving too much away) Drake is alone in the desert and you feel like you’re right alongside him. Naughty Dog does this by using a number of camera and control tricks that bring the player even more in to the game.  Go into a cave with tight passageways and the camera zooms in and stays tight on Drake, so you feel like you’re there.  Another great example is in the opening bar scene where Drake rests against the bar for a second, it’s an extremely believable animation, and doesn’t progress until the character allows it to. Nathan Drake feels less like a character, and more like a believable person.

The Blast Factor: I play most games in a predictable fashion. I sit down, play for a few hours and then I walk away. I do anything else. I

let the game brew in my head. With Uncharted 3, I couldn’t do that, every time I tried to walk away, I was pulled back. I needed to know what happens next; and that my friends is the mark of a truly excellent game. Uncharted 3 is sure to wow you with its fantastic presentation, thrilling gameplay and all around complete package. This is a game that I can’t recommend enough, and your PS3 library is not complete without it.