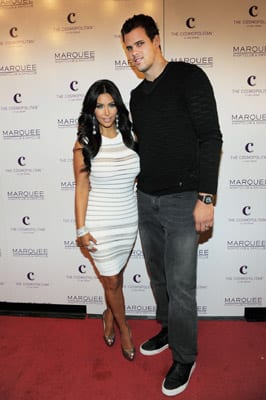 Kim Kardashian filed for divorce from her husband of just two months on Monday morning.  Kardashian and Kris Humphries were married for 72 days, and have already developed “irreconcilable differences,” according to TMZ.

Kardashian hit Humphries with papers for dissolution of marriage, but he reportedly wasn’t expecting it.  Although the two had talked about divorce, Humphries tried to save the relationship because of his religion, TMZ reports.

The main reason cited by TMZ for the divorce was Kris’s alleged “fame chasing.”  Although he claimed to want a “simple life” with Kim in Minnesota, Kardashian’s friends say he’s lying.  The sources claim that when their marriage began to deteriorate, Humphries launched into “Hollywood mode” and began talking about branding his name through cologne, nightclub appearances and the likes.  He even hired a Hollywood publicist over the weekend.

The pair was married on August 20 in a “Fairy Tale” wedding (widely televised, obviously), which cost about $10 million.  Rumors are now swirling that the whole relationship was a hoax, and done solely for publicity.