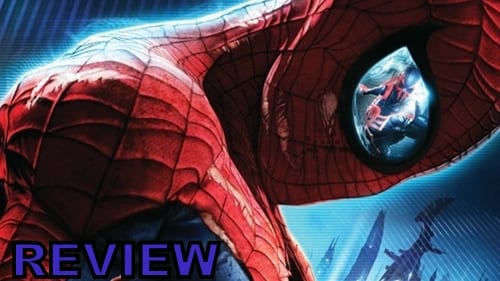 Pity developer Beenox for the decision to release their follow-up to the excellent Spider-Man: Shattered Dimensions alongside the amazing

Batman: Arkham City. The bat signal can’t help but put a dark shadow over a game that already has enough reasons to make Activision worry. Batman aside, Spider-Man: Edge of Time simply isn’t the game its forerunner was and while it’s not terrible, it’s hard to view this sequel as anything but a step backwards.

On the plus side, we absolutely applaud Beenox for focusing on not just the Amazing Spider-Man fans know and love, but Spider-Man 2099–one of the most intriguing characters in Spider-Man’s convoluted history. Created in the early 90’s by legendary comic book writer, Peter David, Spider-Man 2099 has the distinction of being a far better comic book than the awful main Spidey stories that Marvel was pumping out at the time.

When Miguel O’Hara, aka Spider-Man 2099, popped up in Shattered Dimensions last year, fans were instantly onboard and seeing him return in Edge of Time will likely make the game worth checking out for many. The plot this time around is still somewhere dimension shattering. The story opens in 2099, when an extremely zealous scientist named Walker Sloan decides to hasten his way up the corporate ladder of future mega-corporation, Alchemax, through time travel.

Sloan trips back to the 1970s with enough future tech to make Alchemax a mega power well before it was ever even started. After failing to stop Sloan in the future, O’Hara realizes that time must be set right or the consequences will be/are dire—including the death of Peter Parker, the Amazing Spider-Man. To that end, Miguel is able to contact Peter through, well, some bizarre means and tries to warn him.

Parker, being the do gooder he is, decides to put his own personal safety to the wind in order to stop a rampage by Anti-Venom—aka Eddie Brock… aka the original Venom now with polar opposite colors and powers. Confused yet? Well, that’s nothing compared to the inclusion of time distortion between the two spider-men. Somehow, the Spidey in the past can affect the situation of the Spidey in the future.

A good example of this is a cool sequence where Spider-Man 2099 is being pummeled by a giant robot, and Amazing Spider-man has a limited time to destroy the still-in-production robot in the present. Try not to think about it too much, as it raises more questions than the concept could ever answer. Suffice to say, Edge of Time has a terrific flare for the dramatic, especially during such sequences.

The screen will show the in-danger Spider-Man in a smaller view, so players can track his status, while being heroic on the rest of the screen. The problem is that the game hinges entirely on this single time-distortion concept. To make matters worse, the gameplay is entirely linear, so players have no option to just play with the environment to see what happens.

The other major failing here is the environment. Shattered Dimensions may have focused just as much on simple, beat ‘em up action, but it had enough diversity of characters and environments to feel more expansive than it actually was. In Edge of Time, both heroes are stuck in Alchemax’s giant skyscraper, and it’s just not a great place to do all the things a spider can do. The corridors are bland, the air vents are absurdly large (and bland), and enemies are horribly reused. Combat isn’t bad, but just feels repetitive as well.

Both heroes are relatively the same, which isn’t surprising, but the overall combat system and use of combos in particular could really use an overhaul. Each has a special ability—2099 is so fast that enemies keep attacking where he was just standing, while Amazing Spider-man can evade attacks thanks his Spidey sense. In reality, both abilities are almost identical, though they create a cool, multi-colored trailing effect.

As an interactive story-telling medium, Spider-Man: Edge of Time is certainly an appealing game for the heroes’ many fans—especially since Peter David had a strong hand in the writing, particularly the dialogue. Unfortunately, the actual game doesn’t fare quite as well. The combat and environments both feel by the numbers, and its time-tunnel gimmick gets old fast. More importantly, putting these two heroes into confined spaces with nothing to do but endlessly punch bad guys doesn’t do them justice.

Blast Factor: Ultimately, Edge of Time is a definitive step backwards from Shattered Dimensions. We hope this stumbling block doesn’t kill the series, as these characters really do deserve more. The game is still relatively entertaining as a simple brawler and a solid choice for younger players who aren’t quite mature enough for the incredibly dark and violent Batman games.

Spiderman: Edge of Time is available now for the Xbox 360, PS3, Wii, DS and PSP systems. An Xbox 360 copy of the game was provided by the publisher for this review.