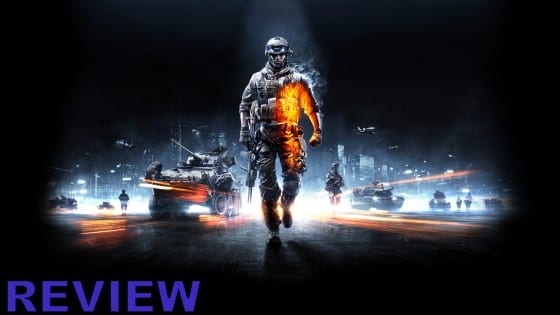 Perhaps the most telling tale of Battlefield 3’s complicated existence comes before the game even enters your system. Certain versions of

the game come in multiple discs, one for the game’s multiplayer suite, which comes first – and the other for the single player. After more than a decade,  EA and DICE  surely know their audience and have justly put the majority of their time and development into the game’s online gameplay, but as a result, the single player suffers and you’re left with a mixed and uneven shooter that fails to deliver on all of the hype it’s generated since being announced. No, Battlefield 3 is not a bad game – it’s just not as good as it could be.

Before you go any further you should know something about me — I’m a single player campaign first kind of guy. Before I even touch the online multiplayer I want a game to tell me a story, I want the game to take me places, to make me care. Quite simply, Battlefield 3 failed to do that for me.  That’s not to say that there aren’t any edge-of-your-seat moments; when Battlefield 3 fires on all cylinders, it’s great action, just not great drama. Take for example on sequence early on in the game where you’re asked to take out an enemy held up in a hotel balcony. It was thrilling to run up to the top of the building and strategize with my squad-mates as to how to take them out; but for the life of me, I can’t tell you just why we were doing it.  The uninspired story of Battlefield 3 feels less like a fleshed out plot, and more like a device to move you from set piece to set piece, and they’re just not all thrilling enough to make you care. You can only take so much military jargon before you just find yourself just pointing at something and shooting.

It’s almost impossible to write this review without mentioning the 800 LB gorilla in the room – the rivalry that’s played out between Battlefield and Call of Duty over the last year. In the midst of the verbal sparring; a strange thing has happened, Battlefield has become everything they’ve spoken out against. Modes from previous Battlefield games have been removed (where’s my commander mode EA?), and the team at DICE seems insistent on making this feel like a Modern Warfare game. All of the plot points are here, the stolen nukes, the gruff commanders and the stereotypically evil Russians; hell there’s even a few missions that feel like they were lifted directly from previous editions of the rival series.  What’s most disappointing about the campaign experience is when it’s clear that they didn’t do the necessary research. In fear of spoiling some key moments, I won’t get into much detail, but there are some moments that defy military law that are sure to take you completely out of the game.

That being said, I can’t deny the sheer enjoyment I had when the campaign worked. When Battlefield 3 fires on all cylinders and gives you frantic action, it’s hard to argue that it delivers.  Lessons are learned quick in the world of Battlefield 3, like the time I was facing down a sniper and mistakenly got up from my cover in an effort to get a better vantage point, only to be instantly shot down. It’s moments like these that make Battlefield enjoyable, where you’re forced to make split second decisions in the face of a coming onslaught. These edge of your seat moments don’t come often in Battlefield 3, but when they do, they’re more than worth it.

Let’s be honest though, myself aside, the majority of gamers are going to jump in to Battlefield 3 for its online play – and this is where the game undoubtedly shines. On the PC version up to 64 players (24 on console versions) can load out in nine different maps which vary from industrial to urban and even some jungle locations. What makes these maps so interesting is not their size (though, they are quite large), but how varied in scope they are.  One map for example had me dodging sniper shots from multiple roofs, while the other had me scurrying between tunnels to try to get an advantage. Of course, this is a Battlefield game, and that means you’ll have access to plenty of vehicles, which can be a great addition to the game, but can also be a pain in the ass. Getting a vehicle, like a tank or a helicopter can turn a battle around completely, but they’re so powerful that each game becomes a mad dash to occupy each vehicle, and if you you’re not the lucky one, you better turn around and run. We also experienced a slew of issues with the EA servers while playing Battlefield online. These issues mostly cropped up with the console versions, and they’re likely to be fixed via a patch, but it was incredibly frustrating to not be able to get in to a game on launch week.

The entire Battlefield package comes together with the new Frostbite 2 engine. There’s no denying that the game is nothing short of gorgeous; from the detail on characters and buildings, to the views of the city around you. Most impressive perhaps is the level of detail Frostbite allows for in its destruction. Remember that scene early on I was talking about? The one where you’re trying to take out the enemy in the hotel? It’s extremely satisfying to watch as the entire building rumbles, smoke starts to billow out and pieces start to fall off. At times its almost impossible to not marvel at how well it all comes together. It’s not all perfect though, as we did notice a few oddly muddy textures and a bit of slowdown – especially in the console versions.

The Blast Factor: Battlefield 3 may be the toughest game I’ve yet to review; it’s majorly flawed, but at the same time, it does so much right that it’s almost impossible not to at least enjoy your time with it. After all the hype and the name calling, Battlefield 3 is here. Was it worth the wait? The easy answer is an emphatic yes; it may not be the end-all-be-all first person shooter you’re looking for, but it is a remarkable one, that you’re going to want to play – especially if you’re into multiplayer.

Battlefield 3 is available now for the PC, PS3 and Xbox 360 from EA and DICE. The Xbox 360 and PC versions of the game were used for this review and provided by the publisher.