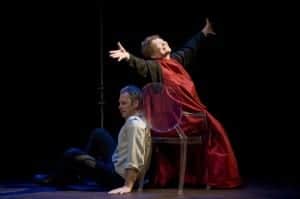 Tina Packer and Nigel Gore in "Women of Will"

“Women of Will” can equally be characterized as: the most fun you will ever have at an English lecture, a Frankenstein’s monster of script limbs and discussion thread and an adoring mix tape: the Best of Shakespeare’s Ladies. Shakespeare and Company founder/artistic director Tina Packer explores Shakespeare with wit and vigor through his female characters. The piece, which she received a Guggenheim Fellowship and two other grants to create, pairs Packer’s love of the plays with her insight on the evolution of Shakespeare’s female characters and how their growth coincides with the Bard’s.  This approach to Shakespeare’s work presents unique obstacles for Packer, her co-star Nigel Gore, and director Eric Tucker. At its best, it swivels between skillful performances of Shakespeare’s characters and engaging discourse full of personality and style.

Packer throws out the Writing 101 rule of “show don’t tell.” This is a show-and-tell situation: the actors tell us what it’s all about, and then show us what they mean with a scene. It works. The explanations that stitch together the scenes offer fresh points of view and illuminate rather than ruin the artistic effect of hearing the verse. Packer is indisputably an expert. There is so much material here, in fact, that “Women of Will” will play in two versions. “The Overview,” playing through October 30, offers highlights of “The Complete Journey,” which spans three nights  (November 4-6) and covers the bulk of Shakespeare’s female characters.

“The Overview” features gutsy scene splices, which move quickly between tragedy and comedy. While relishing the women’s words, it intricately explores how they function in the plays and how they relate to the actual events of Shakespeare’s life and England’s history. However, it is the dynamic between Packer and Gore that makes this piece pop. Though it really is Packer’s show, Gore is not just the token male. Their chemistry during scenes and  transitional dialogue allows the audience a heightened level of comfort and closeness—and in some moments, silliness—unique from most theatrical productions. The actors’ age matters not. To the audience members who murmured, I like my Romeo and Juliet to be young: I challenge you to find a Juliet more winning in giddy love than Packer kneeling on her chair “balcony.”

The format does have its limitations. One is variety. By the time Lady MacBeth makes her entrance, for example, Packer’s delivery has become so familiar that the character’s impact is weakened. Then there’s the academic vibe. While the explications are fascinating, their interruption can make it difficult to be engrossed in the performances.

“The Overview” version of ”Woman of Will is approachable for everyone and offers an evening both intellectual and sensual. “The Complete Journey”—a three-day event from November 4-6—is probably best confronted by die-hard Shakespeare fans and scholars.