I first started playing Ratchet and Clank: All 4 One late at night. Sitting in front of the big screen, the opening cinematic started — all the

conditions were right for a superb Ratchet and Clank experience. Then something strange happened; I found myself not exploring the world, but lumbering around, almost falling asleep in my chair. The next morning I jumped back in to the game with a few others and had a completely different experience – this was more like the Ratchet and Clank I knew.

All 4 One is a rare change from Insomniac for one of their most well known franchises, both in terms of design and quality. It’s two different games, a bad – -almost terrible single player endeavor and a frantic and mostly fun multiplayer romp. Perhaps most dissapoitingly, with graphical hiccups and glitches, All 4 One doesn’t live up to the past pedigree of previous games with superb production values. That being said, there’s still some value in this off the wall title featuring some of gaming’s most underrated characters – especially if you’ve got the friends to fill in the ranks.

Things start off remarkably well in All 4 One. We open to Ratchet and Clank being interviewed and lamenting their adventurous lifestyle, talking about how they want to leave the heroics to a professional – Like newly elected President Captain Quark (or anyone else). Before long, Dr. Nefarious returns, but in the middle of his attempt at revenge, the four are face to face with a powerful new enemy and are transported to an alien planet, and most work together to get home. This leads to perhaps the game’s most endearing quality; there are plenty of heart-warming moments and in-jokes as the former enemies must find a way to work together. It’s hard not to crack a smile at some of the moments, especially when the voice work is done so incredibly well.

Much like previous Ratchet and Clank games, All 4 One attempts to blend a multitude of gaming mechanics and traditions to create one experience; unlike previous games, they aren’t widely successful here. The main draw of All 4 One as opposed to the previous games in the series is that here, you’ll be doing everything you normally do, from platforming to solving puzzles, but this time you’ll have up to three of your friends by your side. Right from the character select screen, I was instantly brought back to my days of bumming around in arcades playing classic coin-op coop’s like The Simpsons and X-Men. That vibe persists throughout the entire game, and the game proves to be a complete blast when it really starts to gain momentum. It becomes a fast and frantic smash and grab co-op beat ‘em up that is worth more than its fair share of beat-‘em-ups. 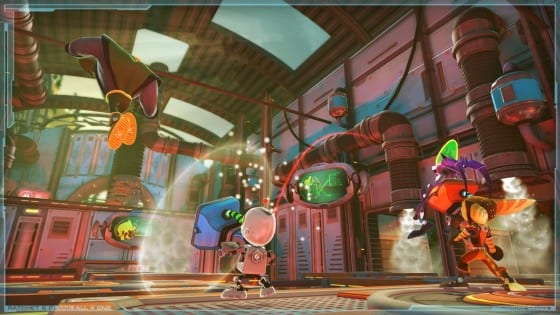 The downside too all of this is that some of what makes the Ratchet and Clank series so remarkable in the first place seems to have been compromised for this feeling. The previous games, especially the phenomenal  A Crack in Time weren’t exactly open world, but they did encourage exploration throughout its worlds, in that regard, All 4 One feels remarkably shoe-horned and linear. You and your motley bunch will follow very set paths as you smash through crates, and jump from platform to platform. I couldn’t help but think to myself; this is a Ratchet and Clank game, I should be able to see what’s behind that wall! It’s pretty disappointing, especially to long time fans of the series.

All 4 One also employs a pretty robust set of weapon upgrades you’ll obtain by playing through the game. Each character has their own set of weapons and each is fully upgradable by purchasing them at bolt machines scattered throughout All 4 One’s maps. It’s a lot of fun to go through and get these upgrades, but I constantly found myself pining for the system of old where you upgrade your weaponry would need to be used significantly before you could upgrade it. Sure the new way seems like a much more streamlined and easy to use, but the previous way almost demanded depth and experimentation with the game’s weaponry.

All 4 One is also missing the polish that Insomniac Games has made a staple of the Ratchet and Clank universe. There are occasional visual hiccups throughout the game, like mudded-out textures and boring color schemes (when compared to the bulk of the game), but by far the most frustrating presentation aspect is how crappy the camera system is. All 4 One employs a much more zoomed out camera to adapt to the new 4-player system, but it also locks at all the wrong times and frequently cuts off things like enemies and power-ups until everyone on the screen is ready to move on.

The Blast Factor: It’s a tough business being a console mascot; one wrong move and you’re doing starring roles on your former rival’s party games.  All 4 One may not be that wrong move (if anything, Secret Agent Clank takes that spot), but it’s still a step backward for the franchise. It can be frantic and fun when played with the right people, but just don’t let it be anyone’s introduction to the Ratchet and Clank franchise.