NEW YORK — Another CMJ Music Marathon has exhaustedly stumbled to a close, and this year was absolutely brimming with wonderful acts and showcases. Here’s what stood out to us from the previous week: 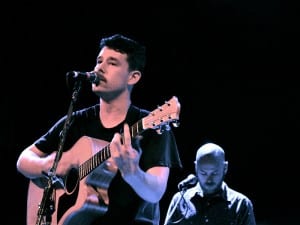 This Mumford & Sons-esque five-piece from Sydney, Australia opened for We Are Augustines at the Bowery Ballroom Wednesday night before playing their own headlining show Brooklyn’s Union Hall Friday. Huddled on the venue’s tiny stage, the band treated the sold-out crowd to an 80-minute set that felt more like a campfire gathering than a concert. Most of the songs on their debut full-length, Moonfire, which was released in August, blend a folk sensibility with aching harmonies, but lead single “Feeding Line” shows they aren’t afraid to rock out once in a while.

We Are Augustines – Formed from the ashes of indie rock outfit Pela, We Are Augustines play Springsteen-esque rock that is nothing short of infectious. The Brooklyn-based trio played multiple shows at this year’s CMJ, and t’s a testament to the band’s excellence live that, though most of their sets relied on unreleased songs rather than material from their debut album, Rise Ye Sunken Ships,the crowds still ate it up. Frontman Billy McCarthy’s unbridled joy as he plays songs that deal even the most heart-wrenching subjects might have something to do with that.

’90s Nostalgia – Attendees well-removed from the “College” portion of the CMJ Marathon were spoiled for choice on Tuesday night. The opening night of this year’s Music Marathon and Film Festival featured (at the same time, unfortunately) a screening of Cameron Crowe’s excellent, definitive biographical film “Pearl Jam 20,” celebrating the grunge band’s 20th anniversary, as well as a performance by Helium/Quasi/Sleater-Kinney descendants Wild Flag. Fresh off a blistering performance the previous Friday at Brooklyn’s Bell House, Wild Flag brought their raucous stage show to a packed Bowery Ballroom. The female foursome’s lineup comprises a Who’s Who of women in rock, including Mary Timony, Carrie Brownstein, Rebecca Cole and Janet Weiss. Anyone claiming rock is dead need only witness Brownstein’s ferocious windmilling on her Gibson to be proven wrong. The Crowe documentary, a bittersweet must-see for any Pearl Jam fan, is a loving tribute that is insightful, informative and touching. For those who missed the screening and the movie’s presentation as part of PBS’s “American Masters” series last Friday, not to worry — it was released on DVD today.

Adrienne Drake – The Brooklyn-based Adrienne Drake took to the stage at Arlene’s Grocery on Tuesday night as part of the No Pulp Music showcase and wowed the audience with a deeply melodic (though decidedly bizarre) techno-pop-explosion. The brainchild of lead singer and master mixer Paul Holmes, Adrienne Drake uses keyboards, computers, samples and obscured vocal projections to create a hypnotic arrangement suitable for an acid trip. Composed as an electronic opera, Adrienne Drake’s debut album Dullabies is available as a free download.

Brick + Mortar – This indie rock duo delivers in sound what their name indicates: solid, earthy music. Armed with only a bass, a drum kit and a handful of samples, front-man Brandon Asraf and drummer John Tacon commanded the stage at Arlene’s Grocery Tuesday night with a high-energy performance and audience engagement. A well-blended mix of rock and reggae, the band’s EP 7 Years In the Mystic Room is a worthy investment.

Gem Club – Somerville’s own Gem Club performed as part of the SubPop/Hardly Art showcase at the Mercury Lounge Thursday night, and might take the prize for the quietest act at CMJ — but certainly not the least captivating. The cello and piano duo of Christopher Barnes and Kristen Drymala, named by The Boston Phoenix as the Best New Act of 2011, record the type of music that is best listened to in a darkened room, alone. Performing at CMJ as a trio, the band’s soft, sad lullabies stunned a crowd that, remarkably, watched in hushed silence.

Zola Jesus – Anyone who can draw a sizable crowd to Manhattan’s Ace Hotel at 10am the week of CMJ is a force to be reckoned with, and Russian-American singer Zola Jesus (a.k.a. Nika Roza Danilova) is no exception. The 22-year-old performed a short set Wednesday morning as part of a live broadcast for Seattle’s KEXP Radio, before playing a full set that night at (Le) Poisson Rouge. The diminutive blond’s fixated staring, on a point only she could see, was as haunting as her operating singing. And, as the crowd learned, her gothic-industrial music, heavy on synths and percussion, goes just as well with coffee as with beer.

Papertwin – Papertwin did not disappoint on Thursday night at Lit Lounge. Though this quartet may not yet have solid footing within the New York City music scene, Papertwin has greatly honed their Radiohead-meets-New Wave sound over the last 12 months. But you don’t have to take our word for it — the band plays at Glasslands Gallery in Brooklyn on Nov. 13th.

The John Steel Singers – Another act that seemed to be all over the schedule at CMJ, the six-piece collective from Brisbane, Australia plays bouncy music featuring trumpets and trombones. Their discernable influences span everything from bluegrass to The Beatles. We were especially sold by their foot-stomping set at Pianos Friday afternoon as part of The Planetary Group’s day party. The group’s debut full-length, Tangalooma, was released last year.

jENNiNGS – For their CMJ debut, jENNiNGS delivered a typically masterful performance at Rockwood Music Hall Saturday. Having spent the last year searching for both a new drummer and lead guitarist, the result is the culmination of four extraordinary musicians talented enough to create a suitable sonic backdrop for frontwoman Mary Jennings’ powerful voice. As a solo act, Jennings is a captivating siren; as a full band, jENNiNGS is a wondrous singer-songwriter-indie-rock-pop-experience not to be missed. The band’s 2010 album, Collapse, Collide, is available online.