We’re all about making lists that make your mouth water. A few years ago, we put out a list of 10 things that taste like Generation Y childhood. Retro things like that combined with the coming Halloween holiday got us thinking of all of the treats that, good or bad, are no longer available in this day and age. 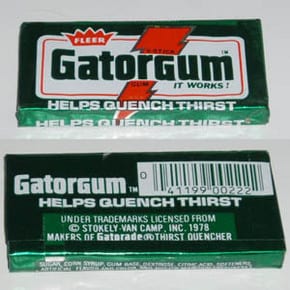 Drink and gum crossovers are a bad idea, but that didn’t stop Gatorade from releasing lemon-lime and orange gum in the 1970s, again in the 80s, in the late 90s and finally in the early 2000s.

Never a commercial hit, the gum did quench thirst. It was manufactured by Fleer, which we also know for its sports cards.

Yoo-Hoo commercials were all over the airwaves when we were kids, but we didn’t do much to help the chocolate drink succeed as a chocolate bar.

Described as “chocolatey coated nougat,” the candy was essentially a lighter 3 Musketeers bar.

Someone thought this was a good idea, and some people actually liked this.

In 2000, Heinz gave the world mustard-style squeeze bottles. Great. But they didn’t stop there. They released their signature ketchup in purple and green colors. It completely backfired. As it turns out, (most) people do not like eating food covered in what looks like boogers and puke.

The product was quickly pulled due to poor sales. 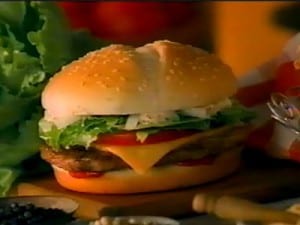 Odds are we never even ate one of these as a kid. The McDonald’s Arch Deluxe was marketed at our sophisticated, burger-enjoying parents.

Trouble was, they didn’t eat it either.

Introduced in 1996, the “burger for adults” arrived with a $100 million advertising campaign. It became one of the costliest flops in fast food history.

The burger was essentially a quarter-pounder with a circular piece of peppered bacon on top, with the usual fixings and special sauce. I don’t know what’s so sophisticated about that.

“Peanut butter with a crunch” — PB Crisps were cookies filled with peanut butter introduced in 1992.

They were delicious, and that was a problem, apparently. More than 2,000 people have signed an online petition to bring the snack back, but Kraft has said it has no plans to re-introduce PB Crisps.

We were actually shocked to learn that BBs had not only been discontinued, but they’ve been gone since 2006. The Bart Simpson-endorsed Butterfinger BB’s were similar to Whoppers.

In 2009, Nestle brought the product back as Butterfinger Mini Bites. But it’s not the same without the implication of gun violence that BBs gave us as kids.

Another victim of the great junk food purge of 2006.

This artificially flavored cereal was launched in 2001. It originally looked like mini slices of bread, but General Mills eventually made it look more like Cinnamon Toast Crunch before pulling it off shelves.

If you are obsessed with French Toast Crunch, you shouldn’t have too much trouble finding it. It’s still produced and marketed in Canada, in the original bread slice design, as “French Toast Crunch” and “Croque pain doré.”

Pepsi Blue was only around for two years, but it’s product placement is forever etched into our early 21st Century popular culture, with advertisements by Britney Spears, Sev and Papa Roach and a very memorable appearance in “The Italian Job” as well as “Garfield: The Movie.”

But Pepsi Blue was a nightmare. It was marketed as “Pepsi, but berry” but it was way too sweet and sugary, tasting like cotton candy more than cola. It also used the controversial Blue 1 color that was actually banned in several countries when Pepsi Blue was released.

Today, Pepsi Blue is still available in Malaysia, or you can buy Jolt Blue CX2, which tastes strikingly similar.

But the 90s was a turbulent time in the food world, and these delicious cookies with the hard exterior and melty chocolate center were not meant to last. 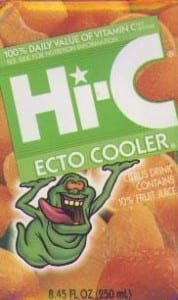 This wasn’t even a product that was meant to last more than a few months or years, but Hi-C’s Ecto-Cooler, a tie-in to the 1987 animated series “The Real Ghostbusters” (based on the 1984 movie) lasted until 2007, when Minute Maid finally pulled the plug.

The box and the drink’s popular commercials featured the Ghostbusters character Slimer. It was an orange/tangerine/green drink that was delicious and tasted like summer and movies and everything that was great about being a kid in the 90s.

In 2001, Ecto-Cooler was renamed Shoutin’ Orange Tangergreen, and Slimer was replaced with a weird “lip monster.” In 2006, it was renamed Crazy Citrus Cooler. A year later, it was gone.

Earlier this year, Dog and Pony Show figured out how to make a drink that tastes exactly like Ecto-Cooler.

These sucked. Clearly some people disagreed, and there is a Facebook group with nearly 8,000 fans of 3D Doritos, a thinner snack, puffed out into more of a nugget than a corn chip.

3D Doritos sold poorly, and it didn’t help that an open bag of these things smelled like a wet dog. Not a great marketing trick. 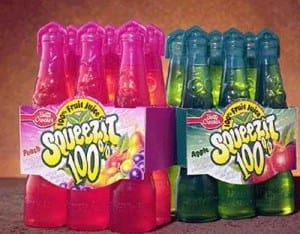 The Squeezit actually had an impressive run during the sugary snack heyday.

This non-carbonated soft drink was sold by General Mills from the mid-1980s until 2001. It came in a plastic container, and the premise was simple: Open it and squeeze to drink.

There are rumors that Squeezits were making a comeback this year, but we could not confirm.

This one you’ll really never see again. The malign-ment of fast food in this decade (and rightly so) has caused restaurants to reshape their offerings so it doesn’t look as obvious that they are feeding you pure death in the form of salty fried potatoes and processed beef.

But back in the day, we ordered our Supersize fries after the multicultural group of skinny kids on the television commercials looked like they were having so much fun eating at McDonald’s every day.

Before the gum or the travel website, we had Orbitz, the gravity-defying drink with the floating orbs.

The fruity beverage was marketed by Clearly Canadian in 1997. It was a complete flop — visually appealing but not delicious in the least.

Orbitz got its spacial effect from gellan gum, which created a microscopic spiderweb effect that allowed the edible balls to float around.

We really had some weird foods back in the day…

In 1996, Coca-Cola wanted to compete with Pepsi’s successful Mountain Dew green citrus soft drink. Surge was originally introduced in Norway as Urge, where it is still available for sale today.

Surge sold well in the US for a few years, but it quickly started to slip when people realized that the “extreme sports” marketing was bogus — it was just a bunch of sugar and caffeine that was bad for you nad not as tasty as Mountain Dew.

Today, Coke’s Vault is similar to Surge, only with more caffeine. 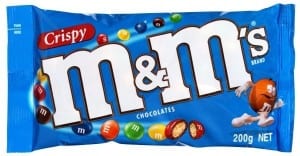 Weird. People generally just loved these M&M candies with the crispy rice center, but they were discontinued in 2005 after six years.

The problem might have been an overabundance of good things. A lot of different M&M varieties came out over years, including M&M’s Minis, dark chocolate, mint, almonds, orange chocolate, coconut, pretzel, cherry, and peanut butter.

Speaking of too much of a good thing — chocolate chips, pancakes, and sausage … on a friggin’ stick.

This lasted about a year. Thank God. 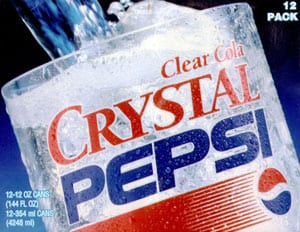 Here’s the thing, 20 years ago a marketing gimmick emerged promoting “clearness” as equal to purity and goodness. It wasn’t started by or limited to soft drinks.

But in 1992, Pepsi introduced four markets, including Providence, to Crystal Pepsi. It sold well, so the company released the product nationwide.

It was a miserable failure, given the millions of dollars in marketing Pepsi had invested. The product was gone within the year.

There is a rumor that Pepsi is releasing a clear cola again next year. We shall see.

This cereal is not officially discontinued, but good luck finding it on the shelf at your local Stop & Shop or Market Basket.

The maple syrup-flavored corn cereal bits were launched in 1996 with a gaggle of grannies seen in commercials laboring away to make more cereal.

The cereal is readily available online if you want to relive your glory years of sugary sweet breakfast. 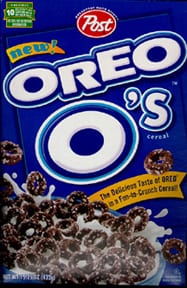 This cereal IS gone — except in South Korea, of all places.

Oreo O’s was launched in 1998 and discontinued in 2007. It is a perfect example of a cereal whose box is better for you to eat than the actual food inside.

There was also something called Extreme Creme Taste Oreo O’s, which contained marshmallows that tasted like Oreo cream.

Why can’t you get them anymore? About three years ago, Kraft and Post parted ways. Post owns the recipe to the cereal, but Kraft owns the trademark and rights to use the Oreo name, leaving no company able to make Oreo O’s cereal. Doh.

You can still find Dad’s at specialty stores and on Amazon.com, but it’s all but disappeared from grocery

stores. Monarch Beverage Company, which bought the rights to the root beer in 1986, helped make it the second most produced root beer in the US before it all but died out in the past decade. Today, you pretty much can’t find it in the Northeast, and some people have complained that online bottles, which can go for $3 a piece, don’t taste the same and are made with corn syrup instead of sugar.