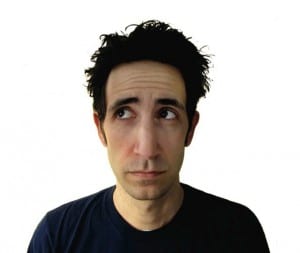 Seth Lepore is a performance artist and member of the C3 arts collective in Northampton, Mass. He’s also a “recovering Catholic” and a “New Age Refugee.” His latest one-man show, “Losing My Religion,” takes a humorous look at the commercialization of ism-based spirituality, alternative healing and self help movements. After successful runs in a number of small theaters and fringe festivals, it plays at the Arlington Center for the Arts, November 11-12.

In a phone call, Lepore spoke with Blast about  the show and the  charlatan gurus who inspired it.

BLAST: What’s your background? Is it in acting or comedy or both?

Seth Lepore: It’s in acting and improvisation as well. Not in comedy improv but, structured improv that’s not comedy-based. But I mean, I am pretty funny. It’s what I’m known for, but I don’t like to call myself a comedian, I like to call myself a “humorist” because I like to be able to be serious and I don’t do ‘bits.’ I’m not doing like [cheesy comedian voice] Heyyyyy, have you ever been in a lobster place? I don’t like that shit. Not that I don’t like comedy, I do, I mean Louis C.K. is one of my favorite people on the planet, but that’s because, you know, he’s brilliant. [Laughs.]

BLAST: You do sort of, storytelling and structured improv?

SL: Yeah. The way that this particular show is setup is it’s scripted. So there are 17 characters in it and I play both myself telling stories from my own past—growing up Catholic, I went to a Buddhist school, leaving all that stuff, getting into the whole New Age thing—and then there’s me playing all of these New Age characters that I’ve met, or I’ve made up or I’ve kind of smashed together.

BLAST: How would you define “New Age”? What does the term mean to you?

SL: Well, at this point it’s kind of gone away from where it’s been in the 70’s—away from the whole occult mystical stuff. It’s kind of a daily thing in people’s lives without them even realizing it. It’s basically another term for self-help at this point, and the ways people can try and heal themselves through different means, or an alternative form of spirituality than Judeo-Christian. However, I’ve found that it’s just as dogmatic. A lot of the same guilt and shame techniques that are used in organized religions are used in much the same way. 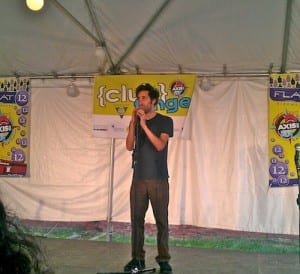 And it’s very product-based. It’s very much a commodified product. Everything from the Law of Attraction, to chakra clearing—and some of this stuff I’m totally down with. It’s that sort of thing where about 10% of what’s out there and 10% of the people who are doing it are fantastic and grounded and brilliant, and 90% of it is complete bullshit. It’s a bunch of charlatans running around promising people things that they can’t deliver on. Which is a lot of how America works, like: If you by this, you’re life will be way better and all of your problems will be solved, and a lot of it’s just not true.

SL: I was 15 and my uncle had lived on an ashram in California. He was deep into meditation and whatnot but he was also very skeptical of the world. And my mother is like a huge New Age fanatic. So I was reading books and looking at this stuff when I was a teenager. And I had been drawn to more spiritual experiences which weren’t based in Catholicism, which I had left when I was 14.

BLAST: Was there something specific that made you leave the Catholic Church? Was there an inciting incident or was it more that this stuff was around and you were just curious?

SL: No, I just felt drawn to this side of things. I always felt like there was some kind of connection I had to the universe that was different than most people that I knew, but I didn’t know how to explain it or how to explore it, so when I started finding books and whatnot, those things were speaking to me. However at that point I was young, I didn’t realize how simplified a lot of it was. And again, a lot of that stuff was helpful to me at that time, and I’m glad I had it at my disposal to investigate this stuff. Thankfully I grew up on the east coast where people tend to be more skeptical and cynical, so when I moved out to California I brought some of that with me and I was kind of like what are you talking about? [Laughs.] People were just on these other planets.  WHO are you? What?

BLAST: What was some of the weirdest stuff that you came across?

SL: Well, I lived in places where if you threw a rock you’d hit somebody who did some kind of therapy, whether it was real therapy or something that they made up or some kind of energy healing work. Again, some of these people were totally valid in what they were doing and no bullshit about it and great. A lot of them were off their rockers and manipulating people and really checked out. There’s a lot of, like,  sex weekend workshops that happen in the Bay Area where I feel like people are just getting re-traumatized—where they’re like, getting naked and staring at each other’s genitals. I don’t see how that’s helpful at all. [Laughs.] 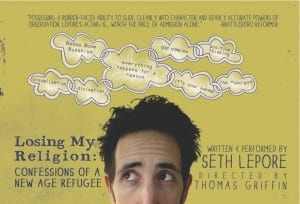 I mean, I’m being a little crass about it. I think that there’ s much more to these things than that, but what I find is, again this thing of people promising things through these products, through these different DVD sets or MP3’s that they’re selling, or ebooks.  A lot of them are just about promising people things that they can’t follow through on, like “this will bring you financial freedom,” or “this will bring you totally happiness 24/7. I don’t see how that’s helpful. Also this stuff is spreading to the megachurches where they’re not even talking about Jesus anymore, they’re just talking about “the power of thought.” So it’s really starting to infiltrate into the larger culture which is really fascinating to me.

I just met all of these people, who were funny to me, but who just didn’t seem very grounded in what they were doing, who were using the same exact lingo, the same exact language as other people I knew who were actually great. I’m like, Huh. There’s something really wacky and wrong here. I don’t know exactly what’s happening. I was still doing a lot of these practices but I was also watching how I would get drawn into certain things…and how this high that you can get is actually not real. It’s actually something that just gets you to this point where you fall again and you go, Oh, my life’s a mess. I need the next thing.

BLAST: It seems like a lot of the critique of the New Age stuff, at least in the 80’s when it was getting really big, was that the trend was, look inward, and everything is about just coming to a greater understanding of your own ego, rather than looking outward and connecting to society, and focusing on being productive for other people. Is that a critique that you relate to? 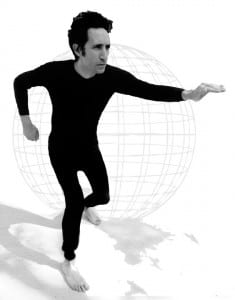 SL: Yeah, I do find a lot of what is presented in the New Age movement and Self Help movement as very narcissistic and very focused on self. Which is an interesting thing for something like Buddhism for example, where you’re trying to alleviate the self so you can obtain inner piece and all that. I went to Naropa University, which is founded by a Buddhist monk. I actually play a Buddhist teacher in this monologue and talk about my own experiences. I had a friend who was at a retreat center and I’m basically playing the teacher whom she had this, [laughs], thing happen with, where the person basically said: all of these things that have happened in your life are your karma because you left the center and you had a commitment to us—

SL: Yeah, it’s such bullshit. It’s such a weird theistic way of turning something that is real, Buddhism, and flipping it so that you can shame the hell out of people. It’s very manipulative and weird. But playing that teacher I can see where she is at the same time. I gain an empathy from playing these people, but I also see the power dynamic in that.

BLAST: So, do you hope that this show will be a cautionary tale? Do you hope that it will appeal to people who have also been sucked into New Age ideologies…

SL: I’ve had a lot of different people come to the show who are involved in the New Age world in way or another, who are interfaith ministers who teach religion at universities, who are Catholics still, or recovering Catholics, or whatever they want to call themselves. They all seem to get something out of it. What I’m trying to do is start a dialogue about why we believe the things that we believe and have faith in the things that we have faith in. For me it’s about presenting what I observe and mirroring it back to the audience and seeing how they react to it.

I’m not trying to kick the New Age in the crotch. I’m trying to show what I see happening within it, underneath it all and seeing of that’s real for other people. The feedback I’m getting is that it’s pretty true.