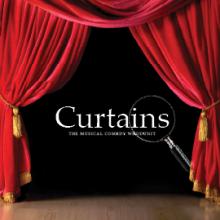 If you have any interest in theater, it’s likely you were in or at least saw a high school production of “Oklahoma” or “42nd Street.” Maybe it’s the young performers, but Boston Conservatory’s production of “Curtains” feels like your high school musical theater director’s wildest fantasy: a high budget, a schoolboard tolerant of bawdy one-liners, and insanely talented students. Set in Boston’s Colonial Theater in 1959, the show maintains the formula and charm of old-time musicals, setting up opportunities for big numbers and short witticisms with minimal attention to story structure. “Curtains” is inherently ridiculous, as most musicals are. It generally takes pure escapism to accept outbursts of song in a semi-realistic setting. But this play’s ridiculousness needs more direction to make it a truly great show.

The story is simple and fun: the (awful) leading lady drops dead on opening night after the final bows, and the entire cast and crew is confined to the theater until the killer is caught. The show’s glaring problem is not the cast or production team, but the book, and how the music fits into it. “Curtains” has identity issues: should it be a comedic, musical murder mystery, or a musical about putting on a musical? I would have rather seen more of the former: numbers like “He Did It” capture the silly whodunit spirit with lyrical cleverness. The only other number referring to the murder case, “The Woman’s Dead,” is introduced so oddly that the potential humor doesn’t play out. The “show within a show” format is a cop-out—an excuse to perform certain songs that don’t really fit into the story. At least, the story the audience expects from the subtitle “a musical comedy whodunit.” Songs like “Show People,” “It’s a Business,” and “What Kind of Man?” (referring to critics) are fun, but are too abundant to keep the story focused in the best places.

That being said, the players are fabulously entertaining. The acting is sound: Michael Tacconi’s theater-loving detective and Malari Martin’s tough-as-nails producer stand out. Director David Gram paid close attention to the texture of the stock characters onstage, and the effect is pleasing and familiar without being boring. While musically simple, composer John Kander’s score is melodic and well-executed. The highlight of the show, however, and what makes it a worthwhile evening, is the dancing. Choreographer Michelle Chassé has created a visual feast of twirling skirts, clean lines and stimulating variety, and the cast’s enthusiasm and precision—not to mention flexibility—makes for a wonderful spectacle. The act one finale, “Thataway!”, was admittedly part of the “show within a show” trope, but genuinely the most fun I’ve had in a theater in a long time.

Unfortunately, the entire package doesn’t hold together as well. There are awkward tone shifts. There are some dull songs and details. But there is also a stage full of energetic, talented show people and high production value. Which is, historically, what musicals are all about.