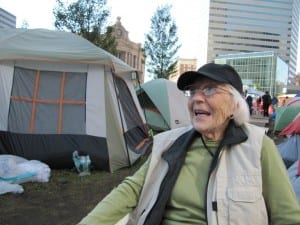 Joan Prum, 85, is a supporter of Occupy Boston who wanted to discuss the protest at her local senior center but was told, “Oh, we couldn't do that, people would get excited!” (Blast Staff photo/John Stephen Dwyer)

Earlier this month, 85 year old Joan Prum took a stroll down “Main Street,” a precarious pathway of pallets and muddy plywood that divides the main area of Occupied Boston into some 40 tents on one side and about 50 on the other. Although 60 or more years the senior of many protestors, Joan, a retired Social Security claims representative from Watertown, was a typical visitor in that she heard about Occupy Boston through the media and came from a neighboring town to show support by dropping off supplies. She was accompanied by Valerie Fullum, 59, a social worker from Cambridge and longtime friend.

Joan explained, “I was brought up to believe in justice. When a particular situation makes it clear justice is being imperiled?” She finished her thought with just a hand gesture as if the conclusion was too obvious to state. Joan added that one of her first jobs after college was at the New York World-Telegram where she participated in the newspaper guild strike of 1953. She describes it as a “searing experience.”

She remained interested in social justice while raising a family and boasts, “I have 5 children, and 8 grandchildren, and when I get home I am going to send them an email to tell them I was here and why I was here…[Occupy Boston] may be hopeless, it may be fruitless, but I still want to be here.” 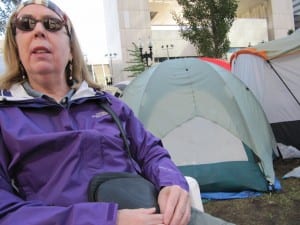 Valerie Fullum, 59, is a social worker who is “enraged by the Wall Street bail out” and felt she needed to visit Occupy Boston “and help in some way.” (Blast Staff photo/John Stephen Dwyer)

As for herself, Valerie said, “I have a history of doing social activism. I saw Occupy Boston march in support of the health care workers’ union and that was wonderful. As someone who is self-employed, I have growing concern and worry about the health insurance dilemma. I see clients every day who have to make some very tough decisions…I’m enraged by the Wall Street bail out…I felt like I had to come see [Occupy Boston] and help in some way.”

Valerie was bothered by the fact that local figures such as Governor Deval Patrick, Mayor Thomas M. Menino, Senator John Kerry and Seán Cardinal O’Malley hadn’t yet made an appearance at Occupy Boston but considered it, in part, their loss saying, “I’m reminded of the fact there isn’t anyone here I couldn’t have an interesting conversation with.” (Governor Patrick did stop in last Saturday morning and was given a tour by Gregg Housh, 34, one of the occupation’s most prominent faces.)

Jumping back into the conversation, Joan described how her enthusiasm for the Occupy Movement made her interested in discussing it with peers in her own age group. “So I asked at the senior center if they have a group for currents events,” she says with laughter, “but was told, ‘Oh, we couldn’t do that, people would get excited!’”

Except when the weather is really bad, thousands of people a day visit the Occupy Boston shantytown that turns 3-weeks old today. Ranging from babes-in-arms to (at least one person) over 100 years old, the vast majority of these visitors are – like Joan and Valerie – sympathetic to the occupiers and the values they seem to represent.