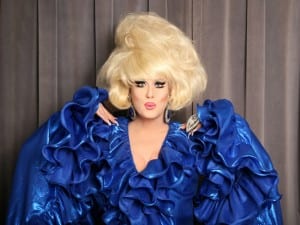 PROVIDENCE — Lady Bunny, “Dean of Drag” on the Logo TV show “RuPaul’s Drag U,” has been a household name in the gay community for a long time. She’s a veteran performer who came out of the Deep South, helped start the annual NYC outdoor drag festival called “Wigstock,” recorded some songs and appeared in a few movies.

She appears Sunday at Downcity in Providence and spoke to Blast about performing, television and politics.

BLAST: How has basic cable changed your life?

LADY BUNNY: TV is great exposure, so having a regular role as the Dean Of Drag on RuPaul’s Drag U has been like handing the nation my business card. I’ve even had teen boys who want to be drag queens sending me naughty pics of themselves. The funny thing is that Drag U caught on much more with real women and kids. Gays prefer Drag Race because it’s bitchier. Drag U is actually kind of sweet. My appearance on Comedy Central’s Pamela Anderson Roast was very brief, but I don’t mind having a bit part on the top rated comedy special ever. One thing you learn about TV is that it makes no difference whether you’re on time, polite to everyone, totally rehearsed or winging it. The only thing that matters are those moments that the camera captures. That’s all the audience will see – they will never know about the backstage drama or who was drunk or difficult. I’d like to do more TV. I never cared for reality TV – until I was on it.

BLAST: Next weekend, you’re in Providence?

LB: At Downcity, performing a comedy set on Sunday October 23rd. John Nelson and I have been working together for years and he truly must be credited for taking the initiative to bring out-of-town talent in on a regular basis, from Jimmy James to Jennifer Holiday. However, I’m told the wilted Hedda Lettuce will be “performing” the week before me so hopefully the joint will still be open. I highly recommend that audiences bring a pillow to her show – she makes an excellent sleep aid.

BLAST: You get a lot of DJ gigs. Will you be spinning too? What will peope get if they go to see them some Bunny in Providence?

LB: Just comedy – fast-paced and raunchy. I’ve updated my parody medleys to include songs by CeeLo, Katy Perry, Britney, Ke$ha, Kelly Rowland and more. There’s an homage to uncut men called Like A Cheese Stick set to the tune of “Like A G6” and a scandalous tribute to the late, great Amy Winehouse. And my Laugh-In style joke routine is now busting on Kim Kardashian, Justin Bieber, Rihanna, etc. It’s been a while since I played Providence so there’s a lot of new stuff. I used to perform there regularly and miss working with B.B. [Hayes] and the rest of the girls!

BLAST: Providence is a gritty little city isn’t? Especially when it comes to strip clubs per capita?

LB: I’m gritty too so I’ll fit right in. And I’m so sick of these gay plays which feature nude guys. If you want to see a stripper, go see a sexy guy with a hard-on – not some broadway twink because you think it’s classier if your strip show calls itself a play. If you’re a horn dog, be a proud one. My act is raunchy and politically incorrect and I sometimes get grief from the gay community about it. But guess what? I hear at every pride celebration that we’re celebrating the diversity of our community. So I proudly represent the demented, filthy, fun-loving pig-in-wig contingent.

BLAST: I only recently learned how politcally outspoken you are. Has your politics won you any new fans? Has it lost you any?

LB: I tell the truth as I see it and let the chips fall where they may. I’m very left of center so I’m sure it turns some people off. However, I only focus on politics on my blog and facebook. Not in my comedy act where people are drinking and don’t want a lecture. But I don’t understand why more gays aren’t politically engaged. We want equal rights for ourselves therefore we must lend our support to other groups which are fighting for equal rights. We can’t just demand something like marriage when we want it and sit by idly while women’s access to abortions is threatened and while students, seniors, minorities and the poor are made less likely to vote because of new ID restrictions. Requiring an ID to vote in many states is a clear admission by Republicans that they can’t win on policy, so they have to cheat via institutionalized voter fraud. Gays have to realize that our agenda can only be advanced by siding with the straights who support us, i.e. liberals.

I’m often confused by the gay agenda. It’s clear progress that gays can now serve openly in the military. Yet look at what our military is currently up to? Is it anything to be proud of? Of course not! We’ve occupied Iraq for a decade and they had nothing to do with 9/11, never had weapons of mass destruction or any plans of attacking us. So why are we there a decade later after killing hundreds of thousands of innocent Iraqis? And if we are killing innocent people en masse – doesn’t that make the US and the US military the world’s largest terrorist organization? Our community came together recently to cry out against the bullying which led to a rash of gay teen suicide. Well, either bullying is wrong or it isn’t. And we have been bullying and killing in Iraq for no reason for a decade. How can gays denounce bullying of their own kind, yet jump at the chance to join military bullies? If our military was protecting the US, that would be a noble pursuit worthy of joining. But at present our military is not doing that. And they never were protecting us in Iraq – they were protecting oil interests. Afghanistan is more complicated than that. But in a recession when our schools are being de-funded nationwide so that millionaires can hang onto their tax breaks, why on earth would we spend $1 million per soldier per year to build schools in Afghanistan? It doesn’t make sense. But I do wholly support gays in the millinery.

BLAST: Watching the crowds at Occupy Wall Street, I keep squinting to see a gargantuan blonde wig towering above the masses with you under it. What do you think about the movement? Will we see you in Zucotti Park at some point?

LB: I am thrilled that people are finally finding their voices and getting riled up. It worked in Egypt. The charade of the debt ceiling debate plainly proved that neither party has the people’s interests at heart. How else could our government consider chopping social security, medicaid and unemployment benefits so that the rich and corporations can continue to pay less taxes than average people do? We’re hurting and nothing is being done. Obama is a huge disappointment who has proven that good ol’ boys come in all colors. I’ll still vote for him over any Republican but we need to hold his feet to the fire and make sure that he serves his impoverished people, not the wealthy donors who pay for his campaign. I have been too busy to make it to the Wall Street protests, but intend to as soon as I have the chance. So look for me in Zucotti Park. I will particularly be focusing on community outreach to young males near the public toilets.