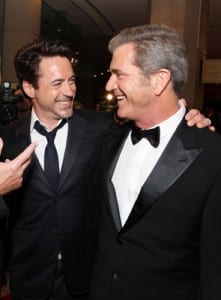 At a gala in his honor last night, Robert Downey Jr. took a chance to tell the industry to forgive and forget Mel Gibson’s hateful and anti-Semitic rants.

“Unless you are without sin—and if you are, you are in the wrong f—king industry—you should forgive him and let him work again,” Downey said after Gibson presented him with an award at the Beverly Hilton Hotel, according to E Online.

Gibson holds a special place in Downey’s heart because he hired Downey even after being warned about the actor’s troubled private life.  Downey told the audience that Gibson once told him to “help the next guy.”

“It’s reasonable to assume…he didn’t imagine the next guy would be him,” said Downey.

Among the audience, were celebrities such as Jennifer Aniston, Jodie Foster, and Jack Black.