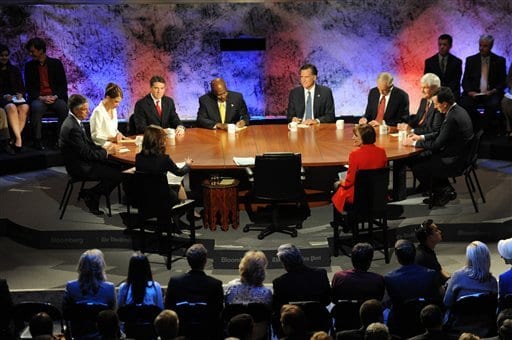 Tuesday’s Bloomberg/Washington Post Republican debate at Dartmouth College in New Hampshire earned further momentum for ex-pizza CEO Herman Cain, who has been gaining attention in the past few weeks with his “9-9-9 plan.” The tax plan would mandate a flat 9% rate on income, corporations, and the national sales tax. What initially seemed like a rhetorical gimmick for the previously mocked presidential hopeful actually seemed to hold water under scrutiny from Rick Perry and Mitt Romney, the other two major players at this juncture.

With voting in the state likely to start in the new few weeks, the session went relatively smoothly. Charlie Rose moderated, keeping the tone more business-like and less of a melee than past debates, and the candidates sat a table, allowing for a discussion atmosphere without as much outright campaigning. The subdued tone was also partially due to Rick Perry’s calmness throughout the evening: his typical fire was noticeably absent, and he was somehow able to turn almost every question he was asked into an argument for energy independence. Perhaps after criticism about his often-fumbling debate style, his advisors believed that silence was golden. This tactic didn’t necessarily make him look like the smartest guy in the room, but it didn’t make him look like the dumbest (a key factor in this crowd). Plus, his promise of putting 1.2 million Americans to work in the energy industry didn’t sound half bad, if he can swing it.

Romney remained comfortable and smooth in the economic debate, taking flak for his 160-page economic plan from Cain (who once notoriously touted the evils of having to read too much) and turning the question into one of his shining moments of the evening.    When Cain asked Romney whether his 59-point plan was “simple, transparent, efficient, fair and neutral,” Romney actually summed it up in under a minute.  The plan focused on “trade policies that open up new markets to American goods” and implementing policies that get Americans back to work.

Romney sat on his lead. He held strong and came out looking like the sharpest of the group. The clear focus of the debate’s attention though, was the presumed new second place candidate. A noteworthy chunk of the entire chat was spent either listening to Cain talking about his plan, or listening to the other candidates try to poke holes in it. Herman Cain, the candidate who seemed to get written-off early in the race, had the evening’s attention, and therefore, the evening itself.

Still, GOP voters have proven fickle thus far. If the Cain praising turns out to be just his fifteen minutes of Republican fame as it was for Perry and Bachman in the very recent past, last night’s debate won’t end up hurting Romney’s chances for the nomination.