It wasn’t that long ago when the infectious Hey Mama broke up, but they are back again for some boot stopping and hand clapping for two exclusive reunion shows this Friday and Saturday night in Boston and Vermont.

“We love playing together and we’ve have had a hunger to reunite with our fans. There’s a whole life that lives inside the songs and experience of Hey Mama that we wanted to revisit and share with world,” said guitarist and vocalist Avi Salloway as to why they are performing together again.

While fans are rejoicing to see the roosty rock Hey Mama back on stage together again, the group is only focusing on these two shows.

“Our energy is focused on the moment right now and that is these pair of concerts in our current and former home! This is it for now,” Salloway said.

The group members have been busy in the meantime with their own solo projects. Last winter and spring Salloweay was in Israel and Palestine working on an ethnographic music and peace project.

“I was guerrilla recruiting young Arab and Jewish artists to come across the line to collaborate on musical projects based in songwriting, recording, and performing. Building these relationships was intense, but once the artists were making music together more often than not a sense of trust was established,” Salloway said. “These artists bear the torch for peaceful progress in the region. I am continuing to work with Heartbeat Jerusalem (the organization I was working with) from stateside and we’re developing a US tour to promote their message.” 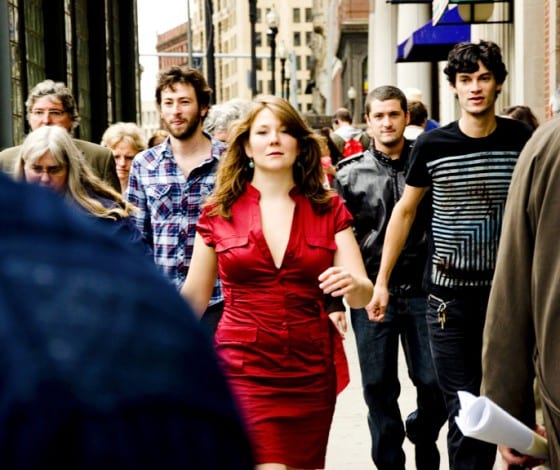 Salloway is not the only member of Hey Mama that is busy. Lead singer Celia Woodsmith has joined Della Mae, an all girl bluegrass band who recently just new record and gearing up for a tour in Germany this December.

What about drummer Jared Seabrook? “Jared’s rocking and rolling and climbing up trees!” Salloway joked.

The beginnings of the popular local band started in 2003 at University of Vermont through Salloways and Woodsmith’s mutual love of Carlos Santana.

“I was rocking out on electric guitar with Carlos Santana on ‘Live at the Fillmore’ in my forth floor dorm room. I turned around to find a sexy girl at my door, proclaiming that I had to play with her roommate (Celia), who was a great singer,” Salloway said. “The next day we met on quad and bonded over playing a collection of great American songs including a fair share of John Prine. The chemistry was palatable and we started performing and writing together, experimenting, touring, and growing together. We moved to Boston in 2007 and wanted to evolve our sonic landscape and established Hey Mama with Jared Seabrook and Ben Kogan who was later replaced with Paul Chase.”

For Hey Mama, songwriting is a collaborate process that often surprises them.

“It’s like fishing. You have the bait and throw out your line with your heart and soul and play the river. Once you’ve got a catch you reel her in, clean the fish and season it,” Salloway said. “Some of our best songs have been collaborations, where Celia and I color the song together and expand on the stories, textures and rhythms in with a ping pong approach. Then we work it out with the band and it takes on a life of its own.”

The band is looking forward to performing to their hometown crowds of Boston and Vermont again. “The synergy between the band and the audience,” Salloway said as to why he is so excited. “At our last show, the crowd was singing along as loud as we were. It was f*cking awesome!”

The band also has been inspired by the protests happening on Wall Street and around the country. “We’re enthused by America’s action to reclaim its voice and direction through the occupy rallies from Wall Street to Los Angeles. As our musical story continues together and individually we are impassioned to sing the song of justice and rock & roll. Friday’s show will be a celebration of the human spirit. Let’s roll!” Salloway said.

Hey Mama will be playing at the Middle East tonight at 8 p.m.