There are two remakes of 80s movies hitting theaters today. One of them is a feel-good pill with lithe dancing teenagers and the other one is based on a claustrophobic horror movie starring Kurt Russell.

I have a feeling I know which one will do better at the box office.

“The Thing” is based, of course, on the 1982 John Carpenter movie of the same name, and is almost universally considered a masterpiece of horror spectacle. The new version doesn’t have the same skill, or the same sense of viciousness, but what it lacks in pacing and drama, it makes up for in sheer gore and thrilling effects.

It’s not truly a remake, actually, but more of a prequel, cataloging the events leading up to the opening scene of the 1982 movie: two men in a helicopter in Antarctica, shooting at a dog. The “final girl” in this case is Kate Lloyd (Mary Elizabeth Winstead), a paleontologist with a heart of gold who is called down to a research camp in Antarctica by a showboating Norwegian researcher who believes he’s found a long-dead alien lying in the ice. It isn’t long before the creature wakes up, blasts from the ice, and begins “imitating” the life forms around it. It’s Kate who discovers that the creature operates like a virus, as well as the only way to kill it (in spectacular fashion, with a flame-thrower). 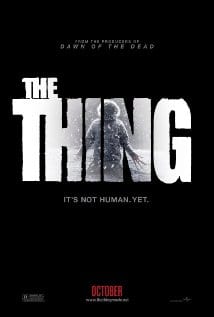 Writer Eric Heisserer dumps the whole notion of interior lives of any of these people- they are simply there to be eaten, or burned, or both. Indeed, my favorite character is Lars (Jorgen Langhelle), a mountain of a Norwegian who cannot speak English and spends the whole movie with a flame-thrower on his back silently appraising various foes. Winstead, who was previously terrific in “Scott Pilgrim vs. the World”, is very appealing, but also generally just an empty suit to spout important lines like “It’s like a virus. It attacks relentlessly.” It would make the movie seem pretty dry and lifeless, but for a while I was too entranced by the monsters to care.

Ah yes, those monsters- they are computer-animated, but the disconnect that would usually accompany watching actors follow around a projected image seems wonderfully absent. The thing this…Thing turns into is a brilliant, kaleidoscopic image of gore with many limbs and tentacles and oozing, popping sores. It brings to mind everything from H.P. Lovecraft’s descriptions of Cthulhu, to Picasso’s Guernica, to even the Crab People episode from “South Park”. The monster in the original “Thing” was hailed as a breakthrough for special effects, and it seems like director Matthijs van Heijningen Jr. felt a deep affection for the very special kind of grotesque John Carpenter unleashed on the world.

Eventually, however, the movie collapses. It’s too long, and soon even the image of a flailing, bleeding space virus being burned alive begins to lose its punch. The climactic fight scene in the alien’s abandoned ship is silly and poorly done, and you’re ready to go home about 20 minutes before it’s over. When I watched the 1982 version of the film the next day, I could recognize the love that this largely unknown Norwegian cast must have had for Carpenter’s film, and the great lengths they went to create a smart, thorough homage to its legacy. But in the end I felt little of it myself.