I’m the Scotch guy at Blast. As editor, I don’t part with any of the whiskey samples that come into the newsroom.

And all of a sudden, a rare whiskey with the most complex taste ever comes around.

The Balvenie Tun 1401 Batch 3 is a $250 whiskey. I don’t expect all of you (nor I) to go around buying it up, if we can ever find it. But it’s a singularly good whiskey that has a vanilla start and a very complex finish with a bite and very strong oak taste.

“We’re fortunate to have some very old and very rare whiskey maturing at The Balvenie Distillery,” said Balvenie malt master David Stewart. “We’ve identified what we believe to be a fantastic range of liquids that will complement one another completely. The result is a marriage where the whole is greater than the sum of its parts. The tun is hand-filled and it takes some doing. The tun has a capacity of two thousand liters so filling it is pretty thirsty work I assure you, but a fantastic and rewarding process none the less. As with everything we do at the distillery, it’s very hands-on but it makes the end result all the more worthwhile.”

You’ll hear all kinds of pairing suggestions, but let me save you the time: filet mignon. If you’re paying this much for Scotch, go buy a $50 dry aged filet and broil it. Pour some butter over before you broil it. Once it’s cooked, pour warm cognac over it and light the cognac on fire. Then drink this Scotch with that buttery, boozed steak filet. I think death row inmates order this. 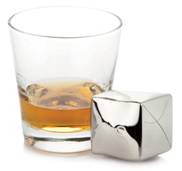 The Tun 1401 comes from a range of casks/barrels including Hogsheads, Sherry butts, and American oak barrels that date many years apart. The contents are placed in the distillery’s Tun 1401, a large marrying vessel that lets them settle before the bottling process.

The whiskey is 50.3 percent alcohol by volume. Drink it neat or with a cold element like the Skybar Chill Cubes from my friends over there. at Skybar. These solid metal cubes get cold in the freezer but don’t melt and dilute this amazing liquor with water.