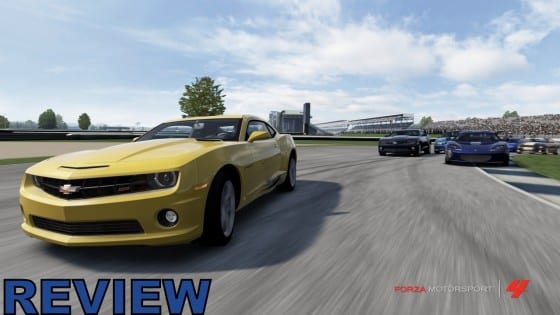 There are a lot of ways you could describe Turn 10’s Forza Motorsport 4. It’s a racing game, it’s a driving simulator, but the easiest way – it’s

The Forza series has always been a visual treat, but nothing that came before it compares to what Forza 4 is packing, and it’s all thanks to the game’s new image-based lighting model.  The locations you’ll be racing in come alive with picturesque scenic vistas and stunning backdrops, and they’re made all the better by the superb lighting model which causes shadows to stretch out to just the right points and interact in just the right ways.  You want a show piece for your new HDTV? Pop-in Forza 4 and show someone its visuals.

Of course, all of this works together to make the game’s main attraction; the cars look downright stunning.  Turn 10 has poured a ton of work into ensuring that each car is perfect down to the smallest detail.  Going through and inspecting the models, especially some of the more exotic and vintage car proves to be an impressive endeavor (especially if you’re able to do so with Kinect). The cars look great in motion as well, as they’re incredibly smooth and weighted just right as they roll down the game’s multitude of tracks.

For true car lovers though, Forza 4’s sweet spot has to be its audio presentation. The game features a wide variety of cars, from classics, to exotic models and each of them sounds incredibly authentic when punching the engine.  Want to get to the heart of a car junkie? Turn the volume up real loud and crank a few engines, it’s stellar, strangely rewarding and almost impossible to resist.

Of course, much like any good car, the true heart of Forza isn’t in its looks, but under its hood, and Turn 10 delivers here as well. Genetically speaking, Forza 4 shares a lot of its core with that of its predecessor Forza 3, but thanks to a generous amount of tweaks and new additions, this is now slight upgrade.  The most noticeable of these updates is how smooth the games monstrous suite of cars handle. Each of the cars handle remarkably true to their real life counterpart, now I may have never driven a Ferrari, but the ones in Forza 4 feel an awful lot like what I’ve always dreamed they would. One of the things I really found myself enjoying about Forza 4 is trying out different cars, how they feel, how they sound – and I’m not even a huge car guy.

One of the most notable features of Forza 4 is just how accessible it can be when compared to other hardcore driving simulators. Sure, the focus here is on sheer driving and skill, but Forza also features a slew of driving aids and tweaks that will allow even the worst driver to enjoy their time with the game. Perhaps that’s the mark of what makes Forza so enjoyable, it’s perfectly fine being one of the most deep racing sims on the market, but it’s also not afraid to turn things down a bit to encourage others to play.

Turn 10 has also made other changes to the Forza formula to better accommodate novice players, but they haven’t necessarily made the game easier, just easier to jump in to. At the easier settings, AI controlled drivers aren’t dumbed down so they’re worse drivers, they’re just not as confident as those found on the higher difficulties. These inexperienced drivers will brake more often and be cautious going in to turns, allowing newer users the ability to learn the finer points of the game, and not just scale by on the easier difficulties.

In previous Forza games, you would only be able to level up cars until they reach level 5, leading to a lot of replayability being lost. That’s fixed in Forza 4 as the game introduces manufacturer specific levels called affinity levels which can be attributed to any vehicle; as long as it’s in the same manufacturer family. In essence, what these levels do is allow players to continue using a car they really like no matter how fine tuned it is while still earning XP and credits you’re able to use throughout the game and adds a ton of replayability.

As robust as the single player experience is, Forza 4 also packs a rather impressive multiplayer suite. The best mode of this suite is easily the rivals mode, which allows you to play against your friends whether they’re online or not thanks to a ghost system. Perhaps most impressive about the multiplayer suite isn’t how robust it is, but how everything works together. Playing online will also give you XP and credits to use throughout the game. In short, that means ultimate bragging rights.

Forza 4 could also be the first game baring the “better with Kinect” branding that I actually believe, as Microsoft’s motion sensing camera actually adds to the experience quite a bit. Using Kinect will allow you to use the cool steering wheel controller as well as the ability to look to your left and right while driving, by simply doing so in real life.  The true allure of Kinect is when you use it to oogle the cars in the auto vista mode…hands off of course.

The Blast Factor: I may never own an Italian sports car or high performance muscle car (unless Guilfoil ups my salary), but thanks to

Forza 4, I can know what it’s like. It’s the most detailed, fun and rewarding driving simulator I’ve ever played. Car junkies are going to love that Turn 10 gets it, and even those who don’t get hot under the collar at an engine will love the jaw dropping presentation values. Forza 4 is simply an accomplishment in every sense of the word.